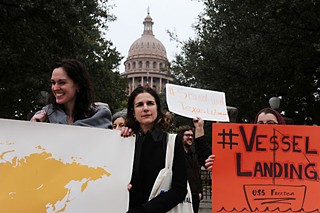 • It's SXSW time at City Hall, too – the next regular City Council meeting is March 20, and last week's session (with Mayor Lee Leffingwell in London) was fairly perfunctory as well, although they did encourage Major League Soccer and waive the fees for Hamlet at Ramsey Park. See "Council: Call It Spring Break."

› Speaking of SXSW, the Fest made hot international news with live-stream appearances of Wiki­Leaks' founder Julian Assange (from London), whistle-blower Edward Snowden (Moscow), and the Intercept's Glenn Greenwald (Rio). Hackles were rising all over D.C. Who's next, Lady Gaga?

› Rep. Mike Pompeo (R-Kansas) was particularly displeased about the Snowden session. In a letter to the Interactive Conference organizers, he insisted they could have found a better choice than "a man ... hired as a systems administrator and whose only apparent qualification is his willingness to steal from his own government and then flee to that beacon of First Amendment freedoms, the Russia of Vladimir Putin."

› On March 20, Council is expected to approve a 25-year solar energy deal with SunEdi­son at $21 million a year – or less than five cents per kilowatt hour, a breakthrough price for solar.

› Hoping to get a jump on building SH 45 before two opponents of the controversial toll road arrive on the Commissioners Court next year, commissioners on Tuesday were scheduled to consider appropriating money on an emergency basis for the project slated for Southwest Austin.

› Twenty employees of Freescale Semiconductor in Austin were among the 239 passengers on the Malaysian aircraft that went missing over the South China Sea on Saturday; the company said they were primarily engineers working at chip facilities in China and Kuala Lumpur.

› Austin Police teamed up with FBI agents to excavate an overgrown field in North Austin, investigating a tip that Roxanne Paltauf, who disappeared from a nearby motel in July 2006, was buried in a shallow grave on the property. After sifting through the detritus, investigators announced that no evidence had been found and that the case remains open.

› After a brief hiatus, Texas' execution schedule is full: Beginning on March 19, the calendar includes one execution a week for the next five weeks; and if executions go as planned, the state will have killed a total of eight people in 2014 by May 14.

› State Rep. Harvey Hilderbran withdrew on Friday from the GOP run-off for comptroller, saying that now-nominee Glenn Hegar had agreed to "work together to enact much of [Hilderbran's] platform." Hegar will face Democrat Mike Collier in the November general elections.

› Fresh off her primary win, Sen. Wendy Davis wasted no time in targeting gubernatorial opponent Greg Abbott. The top issue this week is the Texas Equal Pay Act and the attorney general's defense of Prairie View A&M University against a professor who alleged discriminatory pay.