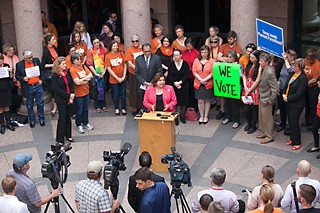 › In his final "State of the City" address Tuesday, Mayor Lee Leffingwell joked about his post-2014 future, declared that Austin is in a "golden era," and warned that if we don't get serious about mass transit – specifically a November vote for urban rail – that we will endanger the city's economy and quality of life.

› Sheesh, chief. APD head Art Acevedo ate a slice of humble pie this week after saying, in the wake of the controversial West Campus jaywalking arrest of Amanda Jo Stephen, that he's thankful this is what passes for controversy in Austin because in "other cities there's cops who are actually committing sexual assaults on duty."

› The Austin Water utility told the Statesman this week that it might have to raise rates this summer to offset, in part, reduced water use caused by successful conservation efforts. The Save Our Springs Alliance quickly issued a denunciation of AW's "disinformation" campaign, saying the decline in water use was easily anticipated, and the rising rates should instead be attributed to the "Mistake on the Lake" – Water Treatment Plant No. 4.

› Former software engineer Brandon Daniel was found guilty of capital murder for the 2012 slaying in a WalMart of Austin Police Officer Jaime Pad­ron. At press time, the sentencing portion of the trial – after which jurors will decide whether Daniel will live or be condemned to die – continues.

› Expect Greg Abbott's campaign to tout the results of the latest UT/Texas Tribune poll, which reports he leads Davis by 11 points, 47% to 36%. However, many have questioned the value of the poll since it was taken Feb. 7-17 – before voters heard about Abbott supporter Ted Nugent calling President Obama a "subhuman mongrel."

› The Republican Lieutenant Governor primary gets uglier after Agriculture Commissioner Todd Staples accused Sen. Dan Patrick of hypocrisy because the supposedly anti-immigrant Patrick has previously hired undocumented workers for his sports bar. However, both Staples and Patrick trail incumbent David Dewhurst in the polls.