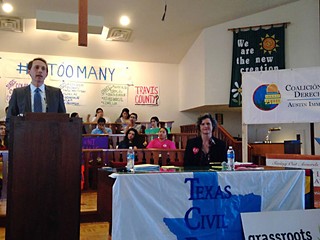 Travis County Sheriff Greg Hamilton isn't on this year's election ballot, but his department's unpopular participation in federal immigration policies has made him a constant target on the campaign trail. In fact, the controversial Secure Communities program – aka "S-Comm" – was the main topic of debate at a Feb. 22 candidates forum, sponsored by the Austin Coalition of Immigrant Rights and other like-minded organizations. According to the coalition, 4,280 Travis County residents have been deported since 2009, and the vast majority of them have no criminal history. [This paragraph was updated to clarify that the Sheriff's Office does not deport residents; that function is handled by federal authorities.]

County Judge candidates Andy Brown and Sarah Eckhardt both voiced their disagreement with the sheriff's insistence that he's bound by law to work with U.S. Immi­grations and Customs Enforcement in following S-Comm's deportation program. The two candidates waited until the end to fire on each other in their respective attempts to explain how they would work to end the county's participation in S-Comm. By the time they finished, the audience had a firsthand glimpse of the tension between the two candidates, which they may have previously only seen in campaign mailers.

Precinct 2 candidates Garry Brown, Rich­ard Jung, and Brigid Shea also weighed in against the policy. Jung cited his experience as a first-generation immigrant and an immigration lawyer to position himself as the candidate who, if elected, would "give a voice to the voiceless." He called Secure Communities an "abomination" that is being largely ignored. "They may build your homes, they may clean your homes, they may own small businesses, but they are out of sight and out of mind to the rest of the community, and that has to change," he said. Brown said if elected he'd seek a full accounting of the costs associated with Travis County's participation in the program, and that he would follow Com­missioner Margaret Gómez's lead on this issue, since her Southeast Austin precinct is home to a large number of immigrant households. For her part, Shea denounced the policy and said the Commissioners Court's greatest advantage is that it controls the sheriff's department budget, part of which picks up the tab for ICE-related work. "So if I can't convince the sheriff in other ways to stop these unnecessary deportations," she said, "I will have a very serious conversation with him about his budget."

However, as Eckhardt later pointed out, it takes the political will of a court majority to "bring pressure to bear" on the sheriff's deportation policy. Attempts to tighten the purse strings can sometimes carry political consequences. She noted that as a commissioner in 2012, she was one of only two commissioners who unsuccessfully tried to block a measure that added $10.1 million to the sheriff's department budget – a likely reference to a big raise the commissioners approved for county law enforcement officers (outgoing County Judge Sam Biscoe provided the second vote). That $10.1 million, she said, is roughly the amount the sheriff's department spends on S-Comm.

"This is politics – anyone who's endorsed by the sheriff's unions is going to have a tough time voting against money for the [sheriff's department]," she said, noting that she's running without the endorsement of the two sheriff's unions (they're backing Brown).

Brown responded to questions in Spanish for most of the forum. He recounted his years as a community organizer in Latin American countries, and outlined how he put his coalition-building skills to work when he returned to Austin, last serving as the chair of the local Democratic Party. He said he'd begin his efforts to eliminate S-Comm from Travis County by seeking an opinion from the U.S. Attorney General. He returned to his native language to take on Eckhardt's failure to stop S-Comm during her years as a commissioner. "What has gone on in the past hasn't worked, so this statement that my opponent is going to continue bringing pressure obviously is not working," he said. "We need to try something new by trying to get an official opinion from the federal government as to whether this is obligatory. I think they're going to say no." He went on, "I'm asking you today for your support in this. To say no to the status quo, to think about how it is that we're actually going to get change in our community, and to make those ideas a reality."