Then There's This: Working Man of Green Gables 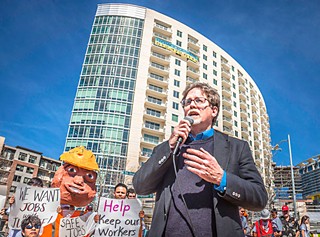 When Gables Park Tower opens later this spring, residents will pay between $1,610 and $5,100-plus per month to live in Austin's newest "eco-friendly" luxury apartment tower, situated on the north shore of Lady Bird Lake.

What most new residents likely won't know is that their new LEED-certified residence served as the scene of a mass protest one sunny weekend in February – Feb. 15, to be precise – when about 200 demonstrators gathered on a grassy area near the Gables Park Tower to call attention to violations at the job site. Hazardous conditions and unpaid wages were the chief complaints aired by workers, several of whom spoke publicly for the first time.

The irony of construction workers protesting outside a luxury apartment tower did not go unnoticed, least of all by rally organizer Workers Defense Project, which advocates on behalf of workers and low wage-earning immigrant families. "Workers who build @gables could not even dream of living in the projects they helped build," WDP tweeted as the protest got under way.

The day before the rally, Heriberto Mendoza, a painter at the construction site, filed a lien on the flagship company, Gables Resi­dent­i­al, for unpaid overtime. He said he has worked 10 to 12 hours a day and some of his co-workers have worked up to 70 hours a week without overtime pay. Accord­ing to WDP, a subcontractor at the site had failed to pay Mendoza for overtime since he began working on the project in January. Workers at Gables Park Tower initially brought a wage theft claim against two subcontractors* on the Gables project in 2009; WDP says it took two years to resolve the case, and there are other workers with outstanding claims. Similar scenarios have played out at other Gables locations, WDP says.

In a statement, Mendoza, who moved to the U.S. from Mexico, also laid out some of the basic hardships he and other construction workers face in Austin, where he's lived for the past 15 years. "My family depends on my wages here and in Mexico," he said. "Sometimes I can't make ends meet. Some­times I have to choose between paying for gas or paying for food. I need gas to get to work, so I have gone hungry in the past. Sometimes I would save part of my small lunch to warm up again at dinner so I would have something to eat."

WDP is targeting the Georgia-based Gables because workers have had complaints about all of the company's condo/apartment projects in the Downtown area, said Emily Timm, the group's deputy director. While all of the workers' direct complaints were against subcontractors on Gables projects, the buck has to stop somewhere, and that's Gables.

"We've received more cases from workers on Gables construction sites than any other single developer in town," Timm said. "So that's where we really want them to work with us to figure out how we can establish standards like fair wages, workers' compensation coverage, safety training, and investing in the workforce overall. ... We really do believe that Gables as a developer has the ability to require those minimum standards of all of their contractors and subcontractors."

A Gables representative said the company learned last week of the scheduled Feb. 15 protest and reached out to WDP. The two sides met Feb. 13. In a statement, the company said, "We are in discussions ... to better understand their position and look forward to a continued dialogue."

"It was just a preliminary conversation," Timm said of that meeting. "There were no commitments made, no action taken, but we're hopeful that they'll continue to have those conversations with us, and hopefully we'll be able to get to a point where we will work together." The next step? "We really need to get some decisionmakers from Dal­las [the company's Texas base] in the room with us so we can make headway."