The All-American, Major League star, and human rights hero spent a few youthful months on the east side of our city's 'Mason-Dixon Line' 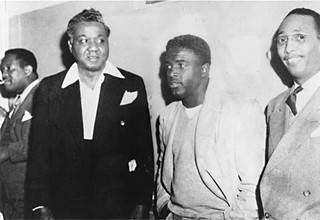 Lonnie Jackson was still in high school when he first met Jackie Robinson. It was in 1944, at the Yeates Drug Store on East 12th Street, half a block west of Chicon. Jackson, who's now 87 and lives in East Austin, had his back to the door and a malt soda in his hands when he heard a man walk inside and ask him about his sneakers.

Jackson quickly recognized Robinson. Only 25 and still a year away from joining the Brooklyn Dodgers and becoming the national nameplate for racial integration, the Pasadena, Calif., kid had already accumulated a wealth of press clippings in local black newspapers for his two-year run at UCLA, where he'd quadruple-lettered: baseball, basketball, football, and track. More­over, Robinson had even accumulated a bit of Central Texas lore after a few trips from Fort Hood, where he'd been stationed for a brief stint at the end of his 31 months in the Army. Aside from the news that whispered down from Killeen concerning a court-martialing visited upon Robinson in the summer of 1944 – when the second lieutenant refused "get-back" orders from a white driver on an integrated Army bus – East Austin's black community knew of him through his friend the Rev. Karl Downs, president of Samuel Huston College and Robinson's pastor as a child in Pasadena.

Robinson was in town visiting Downs that afternoon, but he'd stepped into the drugstore on his way from the bus stop. "He was dressed in a military uniform," Jackson remembers – suit and pants and olive drab tunic and hat. "He looked like one of those Aggie officers." When he saw the high tops hanging over the shoulder of this kid drinking the malt soda, he wanted to play basketball.

The two split to a nearby gymnasium and borrowed a second pair of basketball shoes for Robinson. They played for about an hour, then said their goodbyes. One morning a couple of months later, the Rev. Karl Downs knocked on Jackson's door.

The president of Samuel Huston College had been sent to wake this teenager in the summer because Jackie Robinson had asked him to do just that. Downs had just hired his former parishioner, honorably discharged from the Army in November 1944, to be a member of the college's physical education department and help build a basketball team. His first order of business as coach would be to recruit athletes like Lonnie Jackson. 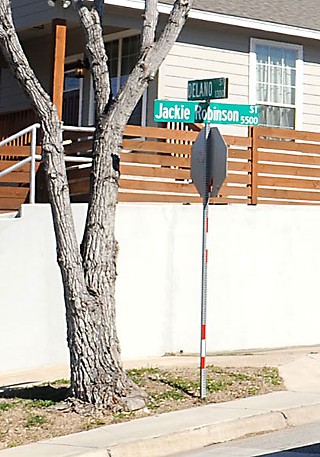 Few of Jackie Robinson's footprints remain from the half-year that he lived in Austin. But his name lives on within the Lincoln Gardens neighborhood. From Springdale Road and Givens Park, drive east on Webberville for half a mile, and take a right onto Delano Street. There, about 1,500 feet south and to the left, you'll see a green sign designating "Jackie Robinson Street. (Photo by John Anderson)

Situated on 6 acres of land that ran from East Avenue (now I-35) toward Chicon on 12th Street, Sam Huston College was the latest in a long line of names for an educational institution for black students tracing back to 1876 and Andrews Normal School in Dallas. The school moved to Austin in 1878, and set up camp at the Wesley United Methodist Church on San Bernard Street, shutting down a few times because of operating costs before reopening in 1900 as Samuel Huston College (after the Iowan donor who wrote a $9,000 check). From there, it enjoyed a consistent run as a well-respected black college until 1952, when it merged with Tillotson College; in 2005, it became Huston-Tillotson University.

The small school had an admirable academic reputation by 1944, when it hosted visits from both Langston Hughes and W.E.B. Du Bois. But its athletic department paled in comparison to Tillotson's. Downs believed the presence of Robinson could bring a certain air of hard work and structure to a group of roundballers who, as SHC graduate and longtime Austinite Roland Harden is quick to recall, needed work. "I was watching him practice and said, 'I can play as well as these guys,' and he said, 'Well, put on some shoes and come out.' That's how I got started," remembers Harden, then in his first year at Samuel Huston. "He took me out and took me under his wings and started teaching me the fundamentals."

Downs' bid to recruit Jackson was successful, but delayed – Jackson deferred enrollment for a year in the Army, planning to matriculate in the fall of 1945. But with Harden and a few others, Robinson managed to assemble a "fairly good team" built on the coach's discipline and mountainous energy. "He worked us hard and taught us a lot about the fundamentals of basketball," Harden says, adding that the coach was adamant about each athlete's education. He was also centrally concerned with the local politics as defined by East Avenue, which he and his players called "The Mason-Dixon Line."

"He was stern as far as the sport was concerned, and otherwise a good, friendly guy – and supremely talented. He'd get out and work with us, and bump us around. He was a much better player than anybody on our squad." Unfortunately, Robinson could only contribute to team practices and exhibitions against military squads. According to Bertha Means, a Tillotson graduate and the wife of Dr. James H. Means Sr. (who coached the Tillotson basketball team on occasion through the mid-Forties), Robinson's squad lost more than they won.

Jackson didn't know it at the time he accepted entry into the military that fall, but Robinson's time at Samuel Huston wouldn't be long. He left his coaching post at the end of the season, after a monthlong tour with the team, to accept a tryout for the Kansas City Monarchs, the most prestigious organization in baseball's Negro Leagues.

Everybody knows what happened to Rob­inson after he broke in with the Monarchs. In 1945, he signed with the Dodgers and did everything from breaking baseball's longstanding adherence to segregation to stealing home in a World Series game (thereby infuriating Yogi Berra). He was a six-time All-Star, Rookie of the Year in 1947, and MVP in 1949. And in 1955, amidst a stacked Dodgers squad that included Roy Campa­nel­la, Gil Hodges, and Duke Snider, Robinson helped abolish the borough of Brooklyn's aching "Wait till next year" rhetoric by winning the World Series over the hated New York Yankees. 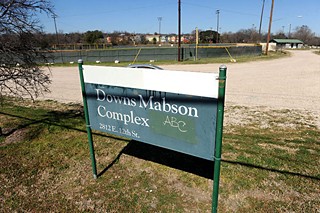 During those years, after most seasons ended, a few teams' worth of players, including Robinson, would organize what were called "barnstorming" tours that would travel throughout the country, playing exhibition games with local teams. Robinson played a notable series of barnstorming games in 1946, with what may have been the first integrated team comprised of blacks and major leaguers.

A couple years later – former Huston-Tillotson Division of Natural Sciences chair General Marshall believes it was in 1948 or 1949 – Robinson and a few other notable names (Larry Doby, Bob Feller, and Rob­in­son's Dodgers teammate Don Newcombe) came to Disch Field, at the time a minor league stadium situated on what's now the Long Center, and played a barnstorming exhibition game.

Because Robinson had left Austin by the time Jackson returned from the Army, that Downtown exhibition game was the second time Jackson saw Jackie Robinson. The third proved a much greater surprise.

Jackson had graduated from Samuel Huston a few years later, and moved away from Austin. But he returned five years later to teach science and coach football at the old L.C. Anderson High School, at 900 Thompson St., between Webberville Road and Hargrave Street. Many years later, Robinson was again in town*[see correction below] (perhaps coinciding with a meeting of the Huston-Tillotson board of trustees, on which Robinson served from 1969 until his death in 1972). He dropped by Anderson to check up on his old hoops recruit.

"The secretary came over the intercom and said there was somebody in the office for me, so I had to get somebody to watch my class," Jackson remembers. "I took off, going to the principal's office, wondering, 'What have I done now?' When I get up there, one of the secretaries led me into the office. There, sitting in there was Jackie Robinson and two coaches. He had come back to see how I was doing, and what was happening with me." Jackson remembers Robinson being glad to hear he'd eventually gone to school and come back to coach.

"Of course, I didn't have any contact with him before," he says. "But I remember that day well."

The African American Cultural Heritage District will hold a weekend fundraiser for Downs Field (below) May 2-4, including a premier performance by Forklift Danceworks of "Play Ball."

*Correction: This sentence originally suggested Robinson might have been visiting Rev. Downs, but a sharp-eyed reader noted that wouldn't have been possible. Robinson couldn’t have been in town to see Downs before his last visit with Jackson, since Downs had died at the still-segregated Brackenridge Hospital in 1948. Indeed, Arnold Rampersad’s Jackie Robinson: A Biography confirms the lifelong educator died February 26, 1948, after what Robinson considered a case of racially charged medical neglect.