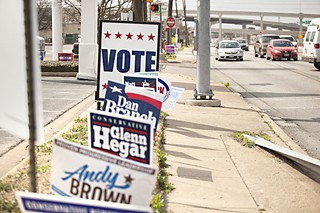 › At a special called meeting at 1:30pm today (Feb. 20), City Council considers economic development packages proposed for tech firms Websense and Dropbox. Next week's draft agenda includes the proposed settlement agreement with the Dept. of Justice on Austin Fire Department hiring, a hearing on use of lakeshore parkland by the Radisson Hotel, and a hearing on the Festival Beach Master Plan. See "Council: Boom Times, Boom Incentives."

› Early voting continues this week through Feb. 28 for the March 4 primaries: See the voting details and Chronicle endorsements, and extended endorsements and additional coverage online at austinchronicle.com/elections.

› The LBJ Presidential Library announced this week that it will hold a Civil Rights Summit, April 8-10, honoring the 50th anniversary of the passage of the Civil Rights Act of 1964. Confirm­ed keynotes include former presidents Bill Clin­ton and Jimmy Carter (and tentatively George W. Bush) with participants including Julian Bond, Taylor Branch, Julián Castro, and many others.

› Protests continued over construction practices by Atlanta-based Gables Residential – on Saturday, Feb. 15, about 200 people protested working conditions on Gables sites at a condo project near Lamar and Cesar Chavez. Workers complain of unsafe conditions on several Gables projects Downtown, as well as failure to pay both straight pay and overtime to many workers. See "Then There's This."

› Testimony in the capital murder trial of Brandon Daniel, charged in the 2012 slaying of Austin Police Department Officer Jaime Padron, began this week. If convicted, Daniel could face death. Daniel had offered to plead guilty in return for taking the death penalty off the table, but the state declined the offer.

› University of Texas police say more than $55,000 worth of Apple MacBook computers were stolen from a storage room in the campus' Main Building, some time after 5am on Feb. 13; the burglary was reported a day later. The investigation is ongoing.

› The Travis County Medical Examiner's Office is reminding the public of the dangers of bed-sharing after the deaths of five infants in the last seven weeks. The office recommends caretakers follow American Academy of Pediatrics guidelines for safe sleep: Babies should sleep alone, on their backs, and in safety-approved cribs.