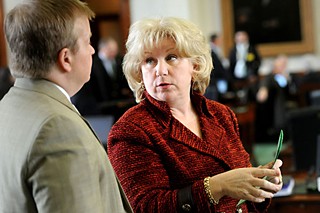 The Department of State Health Ser­vices announced last week that it has initiated contracts with 60 contractors to provide women's health services under an expanded primary health care program, funded over the biennium with $100 million in state money.

The funds were included in the current two-year state budget in an attempt to restore cuts made to women's health services in 2011, when lawmakers – in an attempt to defund Planned Parenthood – slashed by two-thirds the budget that had for years provided family planning and other reproductive health care for low-income and uninsured Texas women.

As of Feb. 10, the state had awarded more than $45 million in funds for FY 2014 to the contractors, who together operate more than 200 clinics across the state. In Austin, CommUnity Care received $571,564 in funding to serve women at nine of its clinics. (Williamson County-based contractor Lone Star Circle of Care, which operates three women's health clinics in Austin, received more than $2.2 million in funds.)

The expanded program seeks to integrate family-planning care with other, general, primary care services, for all women over 18 – including those well past child-bearing age – but contractors agree that at least 60% of the clients served by the funds will receive family-planning services – including pelvic exams and cancer screenings, STD screenings and treatment, and contraceptive care. The state estimates that 170,000 women will be served under the program during the fiscal year.

The announcement came just days before a meeting today (Thursday, Feb. 20) of the Texas Senate Health and Human Services Committee, chaired by Sen. Jane Nelson, R-Flower Mound, convened in part to hear testimony "examining women's access to preventative health care, pregnancy services, and post-partum care, and exploring ways to expand access and improve quality, particularly in rural and underserved areas of the state," according to the hearing notice.

Despite the infusion of new money into the budget for women's health, the state is still struggling to provide care for as many women as were being served before the budget shredding in 2011.

The cuts to the family-planning budget had a swift and devastating impact. In all, 202,968 women were served by the program in 2011; that number declined to just 75,160 in 2012, and declined again in 2013, with just 48,796 women served – a drop of 76% from 2011, the last year the program was fully funded. Meanwhile, however, because most of the state's specialty clinics, including Planned Parenthood, were dumped from the program in favor of clinics and county health departments that provide additional services, the cost-per-client actually increased substantially over the same time period. In 2011, the average cost-per-client was $205.93; in 2013, that was up to an average cost of $240.10 per client, per year.

The state subsequently lost all federal funding for its family-planning program, and the nonprofit Women's Health and Family Planning Association of Texas won the right to administer the funds. Without discriminating among providers, WHFPT was able to serve more than 80,000 women in the six months following the announcement last March that they would take over the funding previously administered by the state.

To make up for that loss in funding, lawmakers last year also replenished the health care budget with just more than $21 million in funds. Still, according to numbers provided to lawmakers and stakeholders last month, the state expects to serve just 65,000 women this year with that funding, roughly $18.9 million of which has so far been granted to 18 contractors. (Both CommUnity Care and Lone Star Circle of Care got money from this pot.)

Meanwhile, in addition to slashing the traditional family-planning budget, the state also retooled its Women's Health Program, previously a Medicaid-paid program, specifically to ban Planned Par­enthood from participation. Planned Parent­hood was the single largest service provider under the original program, serving more than 40% of the up to 130,000 women enrolled in a single month. It was when the state moved to kick Planned Parenthood out of the program that the federal government pulled its 90% funding of the WHP; federal law does not allow states to discriminate among Medicaid-eligible providers.

As has happened with the family-planning program, the WHP also has failed to recover its previous vitality. According to numbers provided to lawmakers last month, the state-funded WHP handled just 86,916 claims for service from January through May 2013, down from 112,798 claims processed over the same period in 2012, when Planned Parenthood was still involved in the program – a 23% decline in claims. (Because of filing and processing deadlines, it can take up to eight months to finalize the tally of claims.)

The Health and Human Services Com­mit­tee hearing begins Thursday morning at 9am and can be viewed on the Texas Senate website (www.senate.state.tx.us).