A Cold Day at Whole Foods 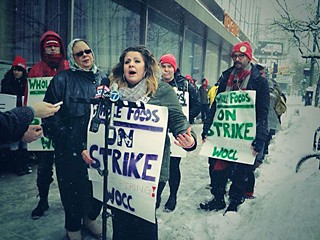 On Friday, Feb. 14, a group of Austin workers joined Whole Foods employees in Chica­go demanding the reinstatement of Rhian­non Broschat, a Chicago store employee who was fired Jan. 28 after staying home with her special-needs son. Broschat said she complied with store policy and believed her absence had been excused, but Whole Foods says her "separation" was in accordance with long-standing and consistent company rules.

According to Manuel Ramirez, an Austin member of Fight for 15 – organized locally and nationally last fall to press for an increase in the minimum wage, initially at fast food restaurants – a group of protesters assembled outside Whole Foods headquarters at Fifth and Bowie streets, where they submitted an online petition signed by more than 60,000 people. "We weren't able to picket inside their premises," Ramirez said, "so we had to confine ourselves to about three feet of the sidewalk, and we handed over the petition." Ramirez said Fight for 15 had joined the national protest because workers "shouldn't have to choose between working and taking care of their child."

The Austin protest joined a larger Chicago action in the wake of Broschat's late January firing, which provoked a brief strike, and was organized by the Workers Organizing Com­mittee of Chicago (a retail and food workers union) and UltraViolet, which describes itself as a "rapidly growing community of women and men across the U.S. mobilized to fight sexism and expand women's rights." The petition is addressed to Whole Foods CEO John Mackey, and reads: "Nobody should have to choose their job over their son. Reinstate Rhiannon Broschat and honor your policy to make room for family leave."

The groups' statement reads, "Rhiannon, a Whole Foods employee of almost two years, was terminated after she was forced to stay home to take care of her special needs son during the polar vortex that prompted Chi­ca­go Public Schools to close on January 28. On February 5th, following the news of her termination, Rhiannon's Whole Foods co-workers decided to stand in solidarity by going on strike in an effort to obtain justice for her and to assure fair treatment for others in the future. A national petition followed, and more than 60,000 workers, Whole Foods customers, moms, and concerned Americans have piled on to demand justice."

According to Broschat, she notified her manager as required when she couldn't find a caretaker or somebody to take her shift, but she was subsequently informed she had been "separated" from the company. Accord­ing to Whole Foods corporate communications spokeswoman Libba Letton, Broschat had in fact accumulated several unexcused absences or other infractions over a six-month period, and thereby sufficient "points" (demerits) to justify termination. "No team member is ever dismissed for a single unexcused absence," said Letton, and added that fewer than 10 Chicago employees were unable to make it to work Jan. 28.

Letton said she couldn't comment in detail on Broschat's specific situation, but added that public notice of the Chicago school closings had occurred the previous day, sufficient time for employees to either make child-care arrangements or find another team member with whom to switch shifts. Letton also said the company uses a "fair hearing process," and Broschat can appeal her dismissal both to the human resources department and "a group of peers from another store," and has done so. According to the petition, Broschat is asking to be reinstated and to receive back pay.