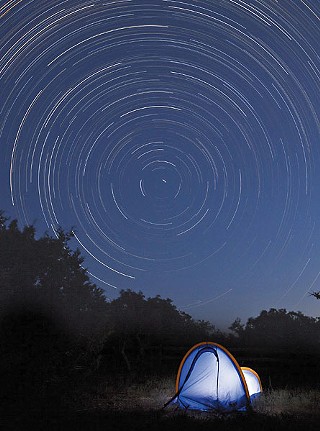 If Texas seems almost mythical, that owes much to the immense night sky. Georgia O'Keeffe painted it just before daybreak as an abstract color field. Terrence Malick filmed it swarming with locusts; Gene Autry even sang about it in the film Heart of the Rio Grande. The wild blue yonder looms large in artistic depictions of Texas, but it's worth noting that most of the examples are historical. In much of contemporary Texas, the sky has become a flat canvas; the "big and bright" stars have faded to barely perceptible dots.

The cause is light pollution. And it's not just a threat to natural beauty. According to the International Dark-Sky Association, light polution can affect the migratory patterns of wildlife, disrupt the human circadian rhythm, and pose a safety risk with a combination of deep shadows and blinding glare. The urban panoply of fixtures, illuminating indiscriminately, is also an enormous waste of energy.

The IDA is hoping that the city of Dripping Springs can provide an example of how to do things better. On Feb. 11, the group named the town the first International Dark Sky Community in Texas, the sixth such designation made in the world. Like most Central Texas towns, Dripping Springs saw rapid growth in the Aughties. Concerned about the character of the ranching community, the local city council quickly adopted an Outdoor Lighting Ordinance (OLO) in 2000. The guidelines are not complicated – lights should be aimed downward and shielded, the smallest amount of light should be used, and light burn time should be limited.

John Barentine, manager of the Dark Sky Places Program, puts it even more simply: "Good lighting policy embraces and promotes the philosophy that outdoor light at night should be used only when and where needed, and in just the amount of light to get the job done."

"Dripping Springs is leading by example," Barentine says, "showing that population growth and economic development aren't automatically incompatible with dark skies conservation. Good lighting policy is something that business and industry can adopt with minimal impact on their bottom line; in fact, the business community in Dripping Springs strongly supports the OLO because they have realized that dark skies are a draw to the area, and more visitors means more tourism dollars put into the local economy."

Despite the strong commitment of the community, some sources of light pollution cannot be controlled by the OLO. Dripping Springs is located between Austin and San Antonio; its sky is brightened by both. So dark skies advocates have taken the fight down the I-35 corridor. Green Earth Lighting's Cindy Luongo Cassidy, who led the campaign to secure IDA recognition, is now leading an effort to help larger cities curb wasteful outdoor lighting. A "better lighting" symposium in September will give municipalities a firsthand glance at Dripping Springs' success.

"There is much for Austin to learn in this lesson," says Barentine. "Currently, Austin has some weak language in its Land Use Code about outdoor lighting adopted in 2007, but its requirements don't take full effect until January 1, 2015." A former resident of Austin, Barentine worked with city planners on the issue. "Fundamentally, I don't see why Austin couldn't have an outdoor lighting policy every bit as good as Dripping Springs'," he says. "Why it does not, has more to do with politics than anything of a practical nature. Fundamentally, it's an issue of awareness. I don't think people who live in Austin think about how bright the sky has become in recent years due to growth and uncontrolled outdoor lighting installations. Living in a big city doesn't necessarily mean living under a bright sky at night."