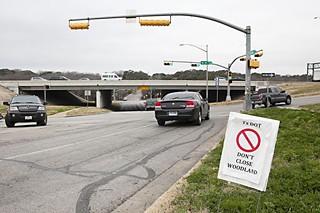 Residents oppose a TxDOT proposal that would close east-west vehicle access on Woodland Avenue at I-35. (Photo by Jana Birchum)

A Texas Department of Transportation proposal to alleviate congestion along a South Austin stretch of Interstate 35 has drawn strong opposition from residents concerned about losing east-west vehicle access on Woodland Avenue. The proposal – one of a few options TxDOT is considering for the Woodland area – is part of an overall $2 billion project designed to increase traffic capacity on I-35 through Travis County.

TxDOT spokeswoman Kelli Reyna said the agency, along with local government entities, has been working for more than two years on the plan, which aims "to improve mobility along and across I-35."

While mostly supportive of the overall project, many residents question the wisdom of one element: closing the underpass at I-35 and Woodland Avenue. Toni House is one such resident. House lives east of I-35 and is a member of the South River City Citizens Neighborhood Association and the East Riverside/Oltorf Combined Neigh­bor­hood Plan Contact Team. "My focus is strictly on my neighborhood," she said, referring to the adverse impact of cutting off connectivity between East Travis Heights and West Travis Heights, which form the SRCC neighborhood association. Wood­land Avenue is also the primary through-road that families east of I-35 use to take their kids to schools or to parks.

The proposed plan essentially "forces anyone wanting to travel east or west on Woodland at I-35 to go a mile out the way and sit in I-35 traffic," House said. South Austin Neighbors oppose a plan designed to fix a traffic bottleneck on I-35.

Reyna said that the original concept would lower the I-35 main lanes "such that there wouldn't be clearance to keep the road open to vehicular traffic." The plan would involve modifying ramping and main lane access, as well as adding auxiliary lanes between ramps. While the current plan closes off "Woodland to through traffic," it would also "construct a bicycle and pedestrian-only bridge over I-35 to maintain bicycle and pedestrian connectivity," Reyna said. And reconfiguring Woodland would address the vehicle bottleneck that typically forms just south of Downtown at Riverside, TxDOT officials say.

It should be noted that, at this point, Reyna and others made it clear that closing the Woodland intersection, "as with all concepts identified in the plan," is still very much considered "preliminary and subject to change."

Reyna noted that the development process of the I-35 implementation plan has been community-driven, with "more than 90 stakeholder meetings, 11 open house meetings, and two virtual open houses." She said the plan, which was made available to the public in August 2013, includes many of the improvement concepts that the community suggested. (For more on the I-35 project, see "Reconnect Austin: Parts One and Two," Jan. 17 and Jan. 31.) "Citi­zen participation and input is an important part in moving forward with any improvements on I-35 and we welcome and encourage community feedback," Reyna said. "We are committed to working with the community and exploring these concepts further before any decision is finalized."

In fact, because of the recent concerns from the neighborhood, TxDOT has developed two possible alternative plans, both of which would "address the engineering challenges associated with the existing I-35 geometry without requiring the closure of Woodland Avenue," Reyna said.

As of Feb. 7, all decisions are far from final. The I-35 plan delineates five phases. The first two – a conceptual plan and an implementation plan – have already been completed. The environmental process, which is included in Phase 3, "is currently unfunded for this portion of the corridor and has not started, yet. Once it starts, we will be able to better establish a timeline" for Phases 4 and 5, Reyna said. Phase 4 will include construction plans, right-of-way, and utility coordination, and Phase 5 will deal with letting and construction. Reyna said that when – or if – the environmental process will be funded is up in the air at this point, and until such funding is secure, no hard timeline is available.

House noted that, at the very earliest, it'll be two or three years before the project could get the funding in place to begin construction. While understanding that it's going to be a long process, she, like other residents, remains optimistic.