Snow days reveal a lot about our roads, and about our other infrastructure 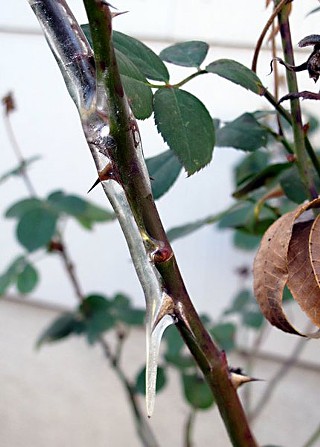 Baby, it's cold-ish outside. (Photo by Richard Whittaker)

It doesn't take much to bring Austin to a grinding halt: barely freezing temperatures and a little bit of precipitation. On four days in the last two weeks – Jan. 24 and 28, and Feb. 7 and 11 – what is arguably America's most vibrant urban economy shut down due to frozen roads. Don't blame bad drivers. To misquote James Carville, it's the infrastructure, stupid.

The problem is not one of weather. It's road design. It's a very simple issue, one that crops up every year to a greater or lesser degree. Look at a map: Austin's urban core is basically a box, locked in between 183 to the north, I-35 on the east, Ben White to the south, and MoPac on the west. Now look at the intersections: long, looping, elevated junctions. The junction of 183 and I-35 is a vertigo sufferer's nightmare, seemingly the result of an all-night brainstorming session between the Jetsons and the design team at Schlitterbahn. In most years, and in most weather conditions, it's not an issue. But you get a crosswind, and freezing rain, and they become a better bobsled run than anything you've seen at the Sochi Olympics.

At 8:15am on Jan. 28 – the day of the biggest freeze and most closures – APD issued a list of road closures, and it was very telling. It was junction, overpass, bridge, junction, overpass, bridge. And there's no playing the "bad drivers" card. No one can drive on frozen roads. Austin residents from northern states were often the first ones to say, you know what? I'm not risking a crash on black ice.

For people who drive to work or school on surface roads only, it was generally no big deal. But for anyone who has to take or even cross a highway, it became dangerous to nearly impossible. That's why AISD, the Travis County and city of Austin government offices, UT-Austin, all the surrounding state and private colleges, and many state agencies either closed or started late. Particularly frustrating for those who depend on public transit, on the coldest day Capital Metro reduced its service to a Saturday schedule. They cited guidance from the city's Homeland Security and Emergency Management office, but it seemed counterintuitive to restrict public transportation on a day when the smart plan was to get people out of their cars.

The most useful public information resource – as is becoming increasingly common in these situations – has been the Twitter feed of APD Chief Art Acevedo. Never the world's biggest fan of Austin drivers (when asked early in his tenure what he thought about driving conditions here, you could hear the eye-rolling), his advice was consistently pretty simple. Slow down, keep your distance, and if you don't have to go out, don't. On the final day of the big freeze, Acevedo pointed to that unavoidable road design problem, tweeting, "We have reports of a vehicle spinning out due to icy rdwy @ 45 & 183. Use caution in the area. @Austin_Police now assessing elevated rdwys."

Let's be honest. Austin just isn't used to this. While what we saw was nothing like what snow-gridlocked Atlanta endured, we deal with freezing temperatures only slightly more often than Iowa contends with tsunamis. Well, up to now, that is. Four days of closed roads – gee, that almost sounds like the climate is changing. Yet by Feb. 11, it really felt like local government was getting a little too gun-shy about opening, and the complaints began. While Acevedo's tweets provided useful information, Austinites were sharing ironic pictures of tipped over cups of ice. The anonymous @aisdclosures parody account became a minor social media phenomenon, live-tweeting from the AISD weather bunker about the peril of fine mists and clearing roads with margarita salt.

Part of the problem was how the information about closures and delays was delivered, particularly for schools. There is no perfect way to contact every parent, but AISD and other districts did their best through a combination of Twitter, email, and text. The big issue was the belated decision-making, with families already en route to campuses when the final announcements reached them. Pflugerville ISD Superintendent Alex Torres publicly apologized for the drip-drip-drip of information. In a statement, he said, "I regret that we did not make the decision to delay or close school earlier, and I sincerely apologize to our students, parents, and staff members." That sentiment was echoed by Round Rock ISD Superintendent Steve Flores, whose ears were the only thing burning in his district as parents vented their frustrations. Via email, he said he understood that "many of our dedicated employees and students were already making their way to school and work in deteriorating driving conditions."

And an important coda. For every salaried employee who got the day off, there was an hourly worker who didn't get paid, or a construction worker still freezing on a Downtown shell, or a parent suddenly scrambling for child care. When the final economic impact study of how this winter affected Austin is finished, someone better factor in those real hardships.