The Next Round of School Reform There's a consensus in the Austin Inde­pendent School District: The schools in East Austin should get the same opportunities, and achieve the same results, as those in any other part of town. That official and public consensus has been in place for decades – yet the district is seemingly no nearer to that goal. Occasionally, one campus beats the system, but its success never seems to spread to the neighboring schools. Yet with four campuses going through the process of reform and restructuring over the next couple of years, the district is hoping that it can finally start lifting everyone. 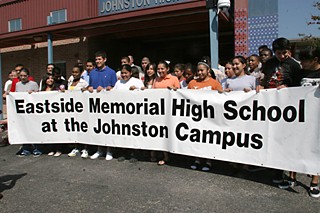 The core problem is a perception that AISD treats East Austin differently from the rest of town. While the administration constantly touts how much money it invests in Eastside schools, the educational return on investment is questionable. Vincent Tovar, lead organizer for community education advocates Pride of the Eastside, sees AISD falling down on its commitment to educate the whole child, instead of constantly triaging East Austin campuses to get them through the next round of state assessments. He said, "Arts are being taken away, testing is increasing, and they're getting kids away from speaking Spanish. That gets test results, so why do anything else?"

That's why the district is finally pushing towards a more holistic approach to campus overhaul. AISD Board President Vince Torres called it "the East Austin plan, which isn't a plan per se, but looking at each school and trying to address all the needs at all the schools." However, years of fiddling with individual campuses have proven that the big challenge is not fixing any one school, but creating a coherent feeder pattern, from pre-K through graduation. Torres said, "Until you strengthen that vertical team and get it aligned, you can do all the work in the world but you're not moving anywhere."

Four campuses are at the heart of this latest round of reforms. Allan Elementary lies mostly empty ever since it was closed in 2013. Pearce and Garcia Middle Schools are popular and increasingly successful, but suffer from low attendance; and Eastside Memorial High School has been through the meat grinder of closure and restructuring more than any other campus in Austin.

Yet all four face radically different futures. AISD is currently asking the community to examine a handful of options for Allan, most of which are aimed at creating a specialty middle school. Next fall, Pearce and Garcia will convert into single-sex campuses, with their attendance zones merged to cover much of East Austin. Over at Eastside, the district is in the first year of a partnership with Johns Hopkins Talent Development Secondary to build up not just the high school, but its entire vertical team feeder pattern into a STEM (science, technology, engineering, and math) hub. In isolation, any of these would be a major task for the district. Combined, they represent one of the biggest concerted pushes to change schooling east of I-35. AISD Chief Schools Officer Paul Cruz argues that, although the tactics may change, the strategy remains the same. "What's continued is the focus on student performance. It's about the improvement of the academic design and instructional delivery." For Drew Scheberle, Greater Austin Chamber of Commerce's Senior Vice President of Education and Talent Development, there's a simple truth: Struggling schools in East Austin can make the grade. Take Reagan High. For years it was on a fast track to closure. Then, with the right leadership, the right programs, and the right staff, it edged back from the brink. "Reagan has turned a real corner," Scheberle said. He credits Principal Anabel Garza (see "On Having Heart," Feb. 17, 2012) with much of the success, such as working with Austin Partners in Education for a grant to provide more dual credit courses. "Those kind of things were not even remotely possible before she started."

Part of the struggle for AISD is in educating parents that their neighborhood schools are still an option. At last estimate, around 5,000 high school students within AISD's boundaries had transferred to charter or private schools, and they're not coming from the high-achieving schools in West Aus­tin. "Most of the charter schools have been growing up on the Eastside," said Scheb­erle; he argues that a successful campus can woo those kids back. Again, he uses Reagan as an example: "It wasn't more than two or three years ago that they had 700 students, and now it's up to 1,100 or 1,200." 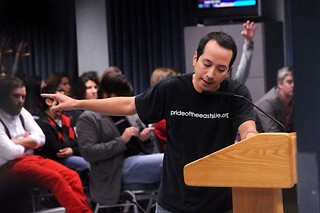 Pride of the Eastside leader Vincent Tovar speaks at a December 2012 AISD board meeting. (Photo by John Anderson)

Part of the recruitment challenge for a successful school targets parents, the rest targets students. For example, Cruz said, last semester the district started an outreach program for Pearce and Garcia, with the newly selected principals visiting both classrooms and community meetings at surrounding elementaries such as Harris, Sims, and Pecan Springs, "letting them know about the activities and academic offerings at Pearce and Garcia." That way, he said, "Fifth-graders are going to know what sixth grade looks like."

There's an added complication. The East Austin of 30 years ago – or even 10 years ago – is not the East Austin of today: The traditional blue collar, majority-minority population has faced the arrival of an increasingly diverse, younger, and often (but not always) wealthier population. Austinites may debate the merits and perils of gentrification, but the reality is that residents, whether they were born into a community or moved there a week ago, are entitled to send their kids to the same neighborhood schools. Moreover, that may be the only way those schools stay open. Tovar is no fan of gentrification and its impact on education ("you can't be optimistic about the future of your neighborhood school when the city is selling off what it means to be in Austin") but he also understands that the district has to serve and attract both populations. He said, "AISD needs to step up their outreach on quality."

Those changing demographics create a new conundrum around school accountability. Education Austin's Ken Zarifis is particularly concerned that, if AISD goes on to proclaim the successes of any of these reforms, they are very careful that they're talking about the same students, especially with a divisive model like single-sex campuses. He said, "If we have an exodus of kids moving in and an exodus of kids moving out because their parents like the model, can we compare that to results at Pearce and Garcia right now?"

Of course, none of this comes for free. These reforms come at a very volatile time for school budgets, as Judge John Dietz has reopened his hearings into the constitutionality of the Texas public school finance system. That means AISD is unsure how much money, long term, it will have for these campuses and the programs that support them. For the past few years, the district has depended on the REACH incentive pay program to hire and retain successful teachers for struggling campuses. The program, which covers 38 district schools, provides stipends to teachers for reaching specific objectives in professional development and student results, ranging from $500 for peer observation to $3,000 for meeting the targets for two student learning objectives. Since first piloting the program in 2010, the district has paid out $41 million, and will expand to more campuses in the 2014-15 school year.

The consensus is that it works, but there's no miracle. It's just a way to keep teachers from leaving for better paying jobs in other districts. Zarifis called it a "Seventy million dollar investment in the Eastside, but it didn't get much attention because it wasn't controversial." However, much of that cash came from a federal Teacher Incentive Fund grant, and that's set to expire at the end of the 2014-15 school year. "That's the problem with grants," said Zarifis. "They have a shelf life."

Nor do the historic educational needs of East Austin stop at I-35. Zarifis taught at Burnet Middle School in North Austin for years, and saw exactly the same issues – poverty, families chasing cheap rents, low English-language skills – that he sees in East Austin. Similarly, just as REACH was primarily designed to help East Austin campuses, it has also helped campuses across town. If the district does revise it, he said, "Rather than it being a program-based or grant-based opportunity, I'd like to see something more structural."