AISD Going Out on a Limb

Single-sex schools aren't all they're cracked up to be 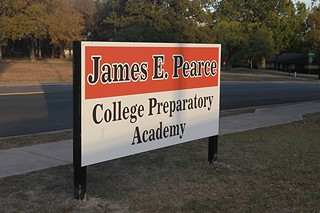 If you didn't know – and it seems that a lot of people don't – next fall, the Austin Inde­pendent School District will be opening two single-sex schools. Pearce and Garcia Middle Schools will merge their attendance zones, and then split their student bodies along chromosome lines – girls to Pearce, boys to Garcia. It's all part of a panoply of reforms in East Austin this year (see "The Next Round of School Reform.") but there's a big problem. After all that effort and stress of redesigning the education of thousands of kids, the predominance of research says single-sex education will bring no gain.

This week, Psychology Bulletin, the journal of the American Psychological Assoc­i­ation, published an article entitled "The Effects of Single-Sex Compared With Coedu­ca­tional Schooling on Students' Performance and Attitudes: A Meta-Analysis." In a statement, report co-author Janet Shibley Hyde, who directs the Center for Research on Gender and Women at the University of Wis­consin-Madison, wrote, "Proponents of single-sex schools argue that separating boys and girls increases students' achievement and academic interest. Our comprehensive analysis of the data shows that these advantages are trivial and, in many cases, nonexistent."

This is a large-scale study, a meta-analysis synthesizing the results from 184 studies covering 1.6 million children in 21 nations, and the results are pretty clear. It breaks down the various academic reports used into two categories, uncontrolled and controlled. The uncontrolled, which used looser modeling, showed marginal improvements in math performance and none in science achievement. The controlled group, which used more rigorous methodologies, showed no improvement. Moreover, single-sex schooling did nothing to motivate kids to stay in school or care about their education.

There's one sentence of particular interest to Austinites in the article's abstract: "Claims that [single-sex] schooling is particularly effective for U.S. ethnic minority boys could not be tested due to the lack of controlled studies on this question." According to the article, one of the core arguments made by single-sex proponents is that "biological and social psychological perspectives make single sex schooling particularly effective for low-income African American and Hispanic boys." But that's not exactly why AISD is futzing with Pearce and Garcia.

It's effectively at the behest of one board member: District 1 Trustee Cheryl Bradley. Basically, she heard what the district said it achieves at its existing single-sex campus, the controversial Ann Richards School for Young Women Leaders, and she wanted that for East Austin. Yet, as I wrote in 2012, "Bradley's plan is not simply about gender. It's about creating what she sees as a safe haven for minority kids. She said, 'You're going to have to learn to navigate this city, being an African-American male and being a Latino male, and that's just it.'"

The problem for the district is threefold. One, it is going out on a limb with no academic evidence to support its reform. Two, it is putting two communities through yet more reforms, and if Austin education advocates know anything, it's that the worst thing for schools is constant upheaval. Case in point: Pearce, which was slammed between closure and threats of closure and repurposing for years. Three, the community doesn't support single-sex schools. That's part of why voters rejected Proposition 4 – which included the funds for an additional districtwide boys' academy – in 2013.

Yet AISD is pushing on with this change. It's hard not to at this point. Senior staff are hired, they're already doing the sales job to convince parents to send their kids to the new campuses, and, most tellingly, the district is making alternative preparations at surrounding middle school campuses for when families decide that single-sex schooling just is not for them.

Funny thing is, we've been here before. In 2011, UT researcher Rebecca Bigler co-authored a study for Science, the journal of the American Association for the Advance­ment of Science, entitled "The Pseudoscience of Single-Sex Schooling" (see "Uncontrolled Experiments," Dec. 9, 2011). Unsurprisingly, it shows results similar to the new Wisconsin-Madison report. However, it adds one significant component to the conversation. While the Psychology Bulletin paper pooh-poohs the idea of any benefits from teaching boys and girls differently, the Science study goes further, noting that "there is evidence that sex segregation increases gender stereotyping and legitimizes institutional sexism."

So, to sum up: the AASA and now the Amer­ican Psychological Association have, through peer-reviewed studies in their leading publications, effectively come out against single-sex schooling. But we're going to go down this path anyway, and that's arguably the most maddening part of this process.