The fight to save the first public housing complex for African-Ameri­cans in the U.S

"If you let these buildings stand and fall apart, no one will remember Rosewood," said Alexis Henderson, Rosewood Courts resident of five years. "It is time for a change."

Shaky hands grasped the communal microphone as person after person faced a panel of professionals, drawing strength from friends who filed behind them in solemn support. This was not a courtroom scene; this was the State Board of Review's Jan. 18 meeting, where all but one board member voted to postpone a decision regarding the nomination of East Austin's own Rosewood Courts to the National Register of Historical Places.

Written by historical anthropologist Fred McGhee, the nomination proposes listing Rosewood Courts in the National Register due to its historical importance as the first public housing complex for African-Ameri­cans in the U.S. After heavy lobbying from then-Congressman Lyndon B. Johnson, construction was completed in 1941. The courts were constructed atop Emanci­pa­tion Park, Austin's most significant Juneteenth parade ground and an important landmark of Texas' African-American history.

The historical importance and richness of the complex seems evident, from its ties to Texas luminary LBJ and ethnic importance to its time-defying International Style architecture. For this reason, it likely came as a surprise to many when an unprecedented number of Rosewood residents and housing advocates attended the Board of Review's meeting to urge board members to postpone their decision until their next meeting in May.

Most residents echoed a concern that they had not been consulted in the nomination process, while housing advocates said they hoped to buy time to allow the board's decision to coincide with implementation of Rosewood's Choice Neighborhoods Plan­ning Grant – a grant given to the city Housing Authority to revitalize "distressed public and/or assisted housing," according to the Rosewood Choice webpage.

"Once you actually get into the units, you really see the limitations that the design and construction materials impose," said Mandy De Mayo, housing advocate of nonprofit HousingWorks. "There's a lot of physical limitations to the property. I think the advantage of taking more time [with the nomination] is it will allow the community more input and will allow the Housing Authority to understand what the nomination would mean for their plans." 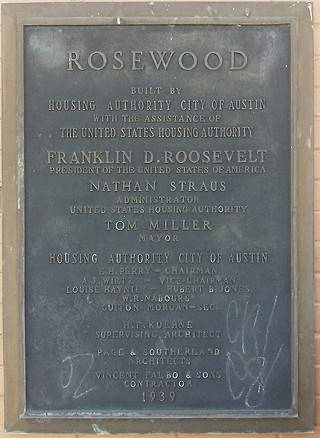 A lack of understanding as to what a successful nomination implies was perhaps the root of the conflicting perspectives manifesting themselves at the review meeting. According to McGhee, many residents who testified in favor of postponing were members of resident leadership councils most likely encouraged to do so by the Housing Authority – which fears listing the property will prevent them from plans of demolition and restoration of the courts. Michael Gerber, Housing Authority President and CEO, confirmed that residents involved in the Choice Neighborhoods Grant's apprenticeship program are paid for their participation in planning sessions, as well as encouraged to attend functions such as the review.

The nomination, which has already been unanimously endorsed by the city's Historic Landmark Commission, must be recommended to the State Historic Preser­va­tion Officer by the State Board of Review in order to be passed to the federal level. From there, a final decision regarding the site's national historical significance is made. If a nomination is finally listed in the National Register, preservation will be encouraged from a national level, though key stakeholders can still make decisions regarding the property – including whether or not to demolish.

While De Mayo stated that demolition is only one of nine options the Housing Author­ity is considering with the Choice Neighborhoods grant, all of which will be reviewed today (Thursday, Jan. 30), several documents within the grant application clearly list demolition as their planned objective. Also outlined in the documents are testimonies from the firm LZT Architects Inc. of design and structural deficiencies, as well as specific renovations that need to be made to meet city codes of requirement. This includes leveling grounds in order to include more accessibility options for disabled residents.

McGhee attributed such shortcomings to "shoddy management" by the Housing Authority, but agreed the buildings should be restored. "Getting it into the National Register will facilitate the Housing Author­ity to get tax credits to rehabilitate and restore Rose­wood," he said. "They don't want that. They want to demolish Rosewood, and we feel that is insane."

Beyond misunderstandings as to what a National Register listing would mean for stakeholders are concerns about the legitimacy of the State Board of Review's decision. According to board protocol, decisions should be uninfluenced by political climate or any other factors outside of the physical text of the nomination. However, board member Maceo Dailey admitted his decision to second postponing was absolutely swayed by the audiences' contributions, and that he did not see it as a violation.

"I'm a student of the Sixties and believe firmly in the adage of 'power to the people,'" Dailey said. "When I saw so many residents of the community speaking passionately about the issue, I thought we needed to honor their issues and find out more about their apprehensions before the nomination being forwarded at that juncture."

While some Rosewood residents called for a change, Ora Houston, Austin resident of 69 years, steadied her hands at the microphone and emphasized that she believed the real issue was of the significance of the property: "This is about making sure that Rose­wood, the significance of the property, is there for all to see that it is a national treasure; it's a Texas treasure; and it is an Austin treasure."