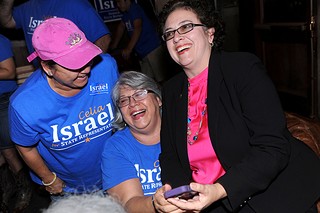 Celia Israel (r), in November, the night she advanced to a run-off (Photo by John Anderson)

When Celia Israel began her drive to replace North Austin's state Representative Mark Strama in House District 50, she was the worst-resourced Demo­crat in a three-way field with strong opponents. But she ended her six-month campaign Tuesday night at a victory party at the Four Seasons, feted by a wide array of Travis County Democrats, praised by lieutenant governor candidate Leticia Van de Putte, and set for a trouble-free campaign to hold her seat in November in a rematch with her Republican opponent, Mike VanDeWalle.

It had been a strange campaign down to the last week. Early voting was abbreviated due to the Martin Luther King Jr. holiday Jan. 20, and two ice storms had affected campaign get-out-the-vote operations. One, coming just before election day, closed eight of the district's 36 polling places. Nasty weather Tuesday morning paralyzed traffic and forced school closures, prompting a court order clearing the county to extend polling hours to 8pm. In spite of those setbacks, the campaigns were able to turn out almost 11% of the vote – an impressive feat for an oddly timed, off-season special election run-off.

In her speech, Israel told the assembled partiers that the campaign's success, assisted by Battleground Texas, provided a blueprint for Texas Democrats to win in 2014. In a statement, the organization called Israel's win the "first of many to come."

There will be a lot of people speculating about the wider import of the win, but at a base level, Democrats will simply be happy to retain Strama's seat through an irregular campaign season that could have seen a surprise GOP pick-up. In the November election, Israel will be assisted by Democratic turnout for gubernatorial candidate Wendy Davis in the Democratic-leaning district, and should be considered essentially a lock.

At the Four Seasons party, Israel seemed mightily relieved. Her campaign had knocked on each door in the district an average of nine-and-a-half times, she said. "We've tried to show a respect for the voter," she said. "And I think that's how we're going to turn Texas purple – personal voter contact."

When she took the stage, introduced by City Council Member Mike Martinez and state Rep. Eddie Rodriguez, she did so to the accompaniment of Alicia Keys' "Girl on Fire."