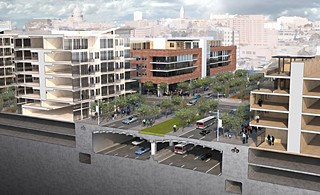 A rendering of Reconnect Austin's proposal to sink the main lanes of I-35 below ground level. The frontage roads are replaced by a city boulevard directly over the freeway, and the area they formerly occupied is developed to help pay for the project. (Image courtesy of Reconnect Austin)

The YouTube video begins with a black-and-white photo of tree-lined East Avenue in 1950. That image fades into one of the road that replaced it: today's six-lane, gridlocked I-35. Then the film makes its case via an animation. Where eastbound Fifth Street meets I-35 today, the elevated freeway blocks traffic and forces it to turn right. But in the video, that brown concrete wall melts away, revealing a two-way street lined with wide sidewalks and modern mixed-use buildings.

"Voilà," the voiceover declares. "Remove the barrier. Connect the grid. Re-engage with your city." 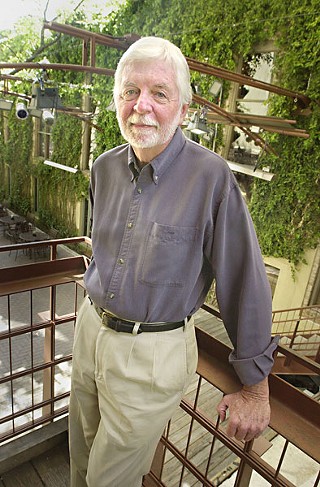 And with that, I-35 through Downtown disappears. 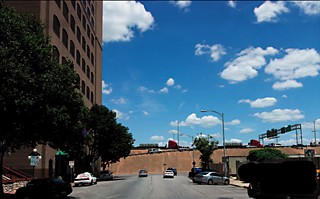 The YouTube video is displayed by advocates of "Reconnect Austin" – the proposal to send I-35 underground and unite the east-west street grid it interrupts. Led by architect and UT-Austin professor Sinclair Black, whose firm (Black + Vernooy) donates the plans, the team has been presenting its vision to civic groups and professional associations for close to a year. It's been garnering interest from otherwise unlikely bedfellows, including the Real Estate Council of Austin and the Sierra Club. A major study by the Texas A&M Transportation Institute (TTI) released in August 2013 concluded that, among the seven scenarios it modeled, Reconnect's plan was one of two that most effectively relieved congestion through town. City Council recommended that the Texas Department of Transportation add the plan to its short list of alternatives for rebuilding I-35.

"The opportunity we have as a community is to influence how [TxDOT] reconstructs the urban core of I-35," says Heyden Black Walker, of the Reconnect team. "We have to not just rebuild it but look at the way it interacts with our city."

Yet the Austin Neighborhoods Council voted to oppose it, and TxDOT says the plan's not technically feasible. 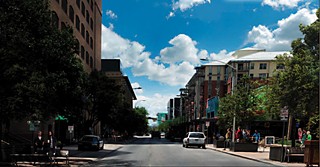 In detail, the Reconnect proposal calls for depressing all lanes of I-35 below ground level for a one-mile stretch from Holly Street to between 15th Street and Martin Luther King Jr. Boulevard. Above them, a continuous bridge would be built across the sunken lanes, enclosing them in a tunnel. In planning parlance it's called a "cut and cap" – the cut being the depression of the lanes, the cap the deck placed over them. The frontage roads, currently on either side of the freeway, would be moved on top of the cap over the interstate, and become a boulevard reminiscent of the original East Avenue, the precursor to I-35. With their removal, 30 acres of land would be opened to development, Reconnecters say, and the resulting sale or lease income and consequent tax base could help pay for the massive construction project.

Drivers whose final destination is Downtown would exit before the tunnel begins, and follow surface streets to their destination. Those driving farther – whether to destinations outside Downtown or to Dallas or Laredo – would take the tunnel. The traffic system would have an intent similar to the current split between the upper and lower decks: Drivers who don't plan to exit on the streets served by the lower deck take the upper route.

The Reconnect team says the plan offers 60% greater east-west connection, and that it disperses congestion by offering drivers more options than the limited-access freeway. Drivers would take streets like Red River, Trinity, or San Jacinto (although the plan might be altered somewhat in detail by the current urban rail proposal along the east side of the UT campus). Continuing conversion of Downtown's one-way streets to two-way as part of the Great Streets Development Program – in which Black played a key role – would help accommodate traffic flow, he says. 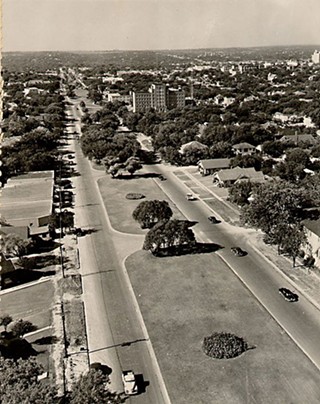 An undated photo of East Avenue (Photo courtesy of www.texasfreeway.com)

It's an idea that Black has championed before, most recently in the mid-Nineties, through the Downtown Austin Alliance. Black's latest project was triggered by his participation in the Design Waller Creek competition as part of the finalist Turenscape + Lake|Flato Architects team. Black says he and David Lake looked at some of the surrounding infrastructure's impact on the creek. "The more we looked at it, the more it was clear that it [I-35] absolutely depresses the future potential of the creek and Saltillo Plaza and everything else in its wake."

He's presenting the idea now in response to TxDOT's I-35 Capital Area Improvement Program, which will add a lane to each direction of I-35 and reshape the freeway through Downtown. That I-35 will be rebuilt is already determined, but TxDOT is in the early stages of deciding what it will look like. At public meetings, it's presented two main options: The first, called "Modified Existing Concept," expands the elevated section of I-35, an idea that's been unpopular. The more expensive choice is the "fully depressed" freeway that sinks the lanes below grade and allows for the later addition of partial caps, like the one over Woodall Rodgers Freeway in Dallas. (See "Klyde Warren Park: 'Think About It Bigger"). Because the whole highway wouldn't be capped under the TxDOT proposal, the frontage roads would remain as they are, also eliminating the option of redeveloping them to pay for the project. Reconnect is asking, as the city has, for TxDOT to include its plan with the other two advancing to the next level of study. No project will start until probably 2020.

Black says he's had structural engineers review his idea and help answer some of the commonly asked questions, such as where exhaust would go. The fumes from cars in the tunnel would be handled similarly to other highway tunnels, subways, and underground parking garages. At strategic points along the tunnel, "scrubbers" – a catchall term for machines that remove carbon dioxide from the air – would capture the exhaust and release it to ground level via vents. Several thousand trees planted along the boulevard would also help clear the air.

According to the Reconnect proposal, putting the frontage roads on top of the highway would "free up" 100 feet of land on either side of the freeway, adding up to 30 acres. The space the roads currently occupy, and adjacent right-of-way, would become prime Downtown real estate, abutting the boulevard and its green space. The land could support 1.6 million square feet of retail and office space, and residences for 7,000 people. He estimates it would amount to a $3.2 billion increase in the tax base over 25 years. These numbers come from Reconnect's own calculations – but the city has asked its consultant to run the numbers, too. A report is expected by March.

Black's idea isn't as maverick or groundbreaking as it might appear. Several other cities across the country have sunk freeways or removed them entirely, though Black says the Reconnect proposal is the only one that prioritizes the creation of new developable land. The Congress for the New Urbanism is collecting the ideas under the heading "Highways to Boulevards," and cites examples of freeways entirely removed in Milwaukee, San Francisco, and Portland. In each case, the freeway's removal spurred development and increased property values. Traffic was dispersed to city streets and absorbed by the grid. While none of these was an interstate freeway (I-35 can't be removed because of NAFTA), the concept suggested by Reconnect is a similar dispersal and absorption.

In the minds of New Urbanists, city planning is now undoing the mistakes of previous generations. The dominance of the Fifties- or Sixties-era freeway restricts "access and exchange – the central purpose of cities," says Peter Park, a planner who spearheaded the removal of a freeway in Milwaukee. Park suggests freeways attract traffic by offering one route instead of many, and thus increase congestion; his argument is supported by the TTI study, whose models based on current driver behavior show that if lanes were added to I-35, drivers would use them instead of other crowded streets, "re-filling" the highway. Because Austin is growing so much, any new lanes will immediately be filled. Adding managed (tolled) lanes helps somewhat (buses can go faster) but "the travel experience along I-35 general purpose lanes does not substantially improve" in any scenario that just adds lanes.

Although the Reconnect Austin proposal has sparked considerable public conversation and media reports, it hasn't been universally embraced. Notably, the highway mavens at TxDOT have been less than enthusiastic, saying the Reconnect plan isn't technically feasible and dramatically underestimates the amount of underground space the lanes would need. The agency is not recommending that the idea advance to the next step of its planning process. Still others, like the ANC and some Eastside neighborhood groups, are suggesting that the proposal is little more than the wolf of gentrification in sheep's clothing. In Part Two of this story, we'll take a look at all these objections, consider Reconnect's answers, and try to give a sense of where the boulevard leads – if indeed it leads anywhere at all.

For Part Two of "Reconnect Austin: Could It Work?" see the News section, Jan. 31.