This week brings 99 items – and a host of potential candidates 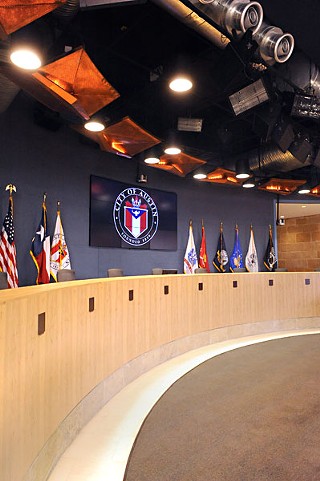 The early draft City Council agenda for the first 2014 meeting (Jan. 23), at 99 items, is not overwhelming, although there are undoubtedly a few dustups among the 20 or so zoning cases (e.g., the former "Commodore Perry Estate" at 41st & Red River, where the Hancock neighborhood has objected to a developer's plans for a mixed-use project anchored by a boutique hotel). There are a few cleanup matters, including a request to the Travis Central Appraisal District for reappraisals of properties affected by the October flooding. A new ordinance will establish the 2014 value of partial property tax exemptions for homesteads of the disabled or people over 65. An ordinance to require additional accessibility/visitability standards for new single-family and duplex residential construction – long in development via Mayor Leffingwell's Committee for People With Disabilities – is due for third reading approval.

Also up for third reading is the much-tweaked attempt to design affordable housing regulations for the University Neigh­bor­hood Overlay. The rules would require new developments west and north of the UT campus to include a proportion of affordable housing (or fees in lieu); whether it will work in practice, or – like the unused density bonus program – simply hamstring more units, remains to be seen. And somewhere late enough to weary even the sternest meeting-hobbyist, Council will hear the owners' appeal of Planning Commission's denial of the neighborhood-opposed proposal for a Little Woodrow's restaurant/bar on Burnet Road.

For a contentious Barton Hills development item (not yet on the draft agenda) potentially affecting Barton Springs, see "Then There's This," p.14.

With fun like this facing the dais, it's no wonder the names of potential Council candidates keep rolling in. CM Laura Morrison confirmed this week that running for mayor is "a question I am seriously considering." Edward Reyes, president of the Dove Springs Neighborhood Association, says he's "strongly considering being a candidate for District 2." Longtime Eastside activist Sabino "Pio" Renteria said it's much too early to decide (he's focused on the March Dem primaries), but he is "keeping his options to run open" in District 3 – where he would face, among others, his sister Susana Almanza.

Workers Defense Project political director Gregorio Casar considered the question over the holidays, and now says firmly: "I'll be running to represent and fight for the people of City Council District 4." Peter Einhorn – policy director for former Travis County Com­mis­sioner Sarah Eckhardt and chief of staff for her appointed interim successor Bruce Todd – says he's considering a run in District 5: "I don't have a time frame for making a decision, but am aware that the clock is ticking." Also in District 5, risk management attorney Dave Floyd, of counsel to the DeLeon & Wash­burn firm, and a board member of the Texas Advocacy Project, says he's "seriously considering a run."

When we last touched base, longtime civic commissioner Mandy Dealey said she was "not likely" to run in District 10; she now says, "I have been persuaded to run for Council Place 10. I guess this is a case of 'never say never!'" And finally, Matt Lamon, longtime Austinite and current chief of staff to state Rep. J.M. Lozano (R-Kingsville), says he "intends to seek the [District 10] seat" and is "looking forward to working on issues that matter most to Austinites."

He could begin by reviewing that Jan. 23 agenda.

For complete coverage of the burgeoning Council candidate list, see the Newsdesk at austinchronicle.com/elections. And if you're among the "seriously considering" not yet listed, please drop a line to mking@austinchronicle.com.