As Austin considers Reconnect Austin, a Dallas project gives a taste of what could come 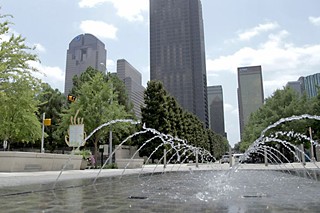 An oft-cited analog to the Reconnect Austin vision is Klyde Warren Park in Dallas. Opened in October 2012, the park is 5.2 acres built on a cap over the already sunken Woodall Rodgers Freeway, whose 1.5-mile span connects I-35 to the North Central Expressway in the urban core. The deck over Woodall Rodgers connects the Uptown and arts district/Downtown neighborhoods, which had been linked by intermittent bridges that spanned the sunken 8-lane freeway between them. While smaller than the more ambitious Reconnect Austin proposal, now one continuous, three-block-long bridge encourages pedestrians to move between the two.

It's also a destination in itself; the park, which is privately operated and maintained by the Woodall Rodgers Park Foundation, attracted a million visitors in its first year of operation. "It's the most integrated, dynamic part of the whole city," says Linda Owen, the park's first president, who assembled the design and construction teams for the park and led its initial fundraising. "[The public] didn't have any idea how starved people were for that kind of open space for the community." In addition to green space, a children's area, a restaurant and performance pavilion, the park offers hundreds of free activities each month – boot camps, salsa lessons, chess games – underwritten by corporate donors.

The idea for the deck park was initially championed in 2002 by John Zogg Jr., of Crescent Real Estate Holdings LLC, who "saw it as a big opportunity to change Dallas to compete with other cities that were making these kinds of investments." With no idea whether the project was actually feasible, he hired the Office of James Burnett – a landscape architecture firm that ultimately designed the park – to draft a conceptual plan. Zogg contacted property owners and city officials and began hosting meetings about the project. The idea got a big break when the Real Estate Council of Dallas granted it $1 million and staff support. The money came from RECD's nonprofit arm that contributes to community development projects across the city, and was "highly speculative," Owen says. Zogg explains: "We were hiring engineers to look at it and working with TxDOT to look at it, but nobody knew if the structure could be built on top of the freeway." But the resulting publicity led to another $2 million donation from Texas Capital Bank founder Jody Grant and his bank.

Ultimately the deck and park were funded at a cost of $110 million through a public-private partnership. A combined $56 million in public money from city of Dallas bonds, state highway funds, and the federal stimulus built the infrastructure. Roughly $50 million from private donors built the park itself and funded the initial programmed activities. Owen describes the fundraising process as a back-and-forth between the public and private sectors, with each donation lending the project greater credibility.

"You start with the smallest nucleus of self-interested potential donors, because they're going to get a windfall if this thing happens – the value of their property will be enhanced," Owen says. "It makes sense to go to them first, and then at some point you go to the traditional philanthropic community, who sees it as an asset for the community at large."

She suggests the fundraising for Klyde Warren was successful partly because it followed the 10-year philanthropic campaign to build Dallas' AT&T Performing Arts Center. "You had all those donors who are interested in the cultural life of the community and put $350 million into that sector of the city, so we kind of coattailed off that energy."

Is there a potential for a similar domino effect in Austin?

Reconnect Austin's "Opportunity Corridor" map shows I-35 flanked by the major projects planned nearby. The Waller Creek District, where a floodwater-diverting tunnel will allow 28 acres to be redeveloped, parallels the stretch of I-35 Reconnect wants to bury. (One of the Waller Creek Conservancy's criteria for the new design was a plan that "bridges two parts of a city now divided by an imposing interstate highway.")

UT's new medical school and the city's proposed innovation district will transform the area adjacent to the Waller Creek project. And on the east side of I-35 is Saltillo Plaza, a stretch of Capital Metro-owned land between Fourth and Fifth streets that will be redeveloped. All of these will affect the future of the urban core, and all would benefit from a sunken I-35.

The other is a strong working relationship with TxDOT. Zogg describes the agency as initially "intrigued" by the idea of the deck park. "TxDOT was taking a different approach to the beautification of highways," he says, "not just putting a road in but trying to make it somewhat beautiful as well." If TxDOT, the city and Reconnect could come to agreement, they could make a tremendous impact on Austin, he says. "Whatever y'all are thinking about doing, think about it bigger, because you have an opportunity to do something extremely significant."