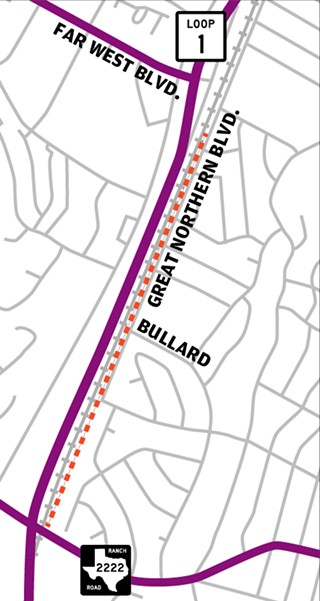 A group of Allandale residents object to a MoPac sound wall proposed along Great Northern Boulevard between RM 2222 and Far West Boulevard, which would rise as high as 20 feet in places. Some residents have suggested moving the wall closer to MoPac on the other side of the railroad tracks. (Images courtesy of CTRMA)

The recently begun MoPac Improvement Project of the Texas Department of Transportation and the Central Texas Regional Mobility Authority is an attempt to alleviate traffic congestion through a variety of changes to the west side expressway, including adding one express lane in each direction and widening Enfield Bridge by more than 14 feet. The project also involves building approximately 7 miles of 8- to 20-feet-tall "sound walls," in 19 sections between Anderson Lane south to Cesar Chavez, intended to diminish the noise generated by the additional vehicle lanes.

However, a group of Allandale residents have objected to the mile-long wall known as Sound Wall No. 3, or Barrier 3, along Great Northern Boulevard between RM 2222 and Far West Boulevard – specifically the portion north of Bullard Drive. Most of the walls will be right next to MoPac and on state right-of-way; the disputed portion, as currently proposed, would be located about 150 feet away from MoPac, on the city's right-of-way.

Don Goertz is the executive director of Austin Montessori School, which has two campuses on Great Northern Boulevard. "I have no feeling about the wall in its entirety," Goertz said. "I just don't want it to be from Bullard on up past where we are." Unlike other parts of the walls that will be both shorter and behind residents' backyards, the 20-foot sound wall north of Bullard will block residents' views from their front yards. Allandale resident Scott Ehlers notes that construction would require tearing out trees and creating a "much less natural setting," and could obscure sunsets, airflow, and wind. He's also concerned that the wall could become a magnet for graffiti.

Louis Laves-Webb, who bought his property on Great Northern Boulevard last spring, said, "I'm open to other alternatives, but my first reaction is to not have a wall at all. ... If there were something where they could put it closer to MoPac on the other side of the tracks or something, I'm open to hearing other alternatives." Ehlers said, "As a compromise, I think we could live with a much shorter wall that is right up next to MoPac." But, he added, "We're all in agreement that a 20-foot wall right next to Great Northern is a bad idea."

Most of the project's estimated $200 million cost will be underwritten by state and federal funding. But since Sound Wall No. 3 would be on the city's right-of-way, the city has agreed to handle its long-term maintenance and liability. Yet the staff backup to the city's interlocal agreement, approved by City Council on Aug. 2, 2012, noted no fiscal impact associated with the wall. In a recent memo to council members, the "Friends of Allandale Green Space" suggest that "this transfer of responsibility has not been given due consideration" and will cost too much over time, and request that the city recommend moving the wall to the MoPac right-of-way. 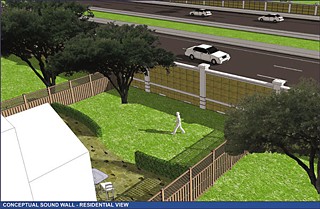 Opponents also question whether the sound reduction will be significant enough to justify construction. CTRMA spokesman Steve Pustelnyk said that train noise actually exceeds that of the highway, so if the wall is moved, the adjacent homes will still be exposed to noise. "In order for the wall to be considered reasonable and feasible" under state and federal standards, he said, "it has to reduce noise by a significant amount for the homes that are adjacent to the wall."

However, the trains pass only a few times a day, Goertz noted, and he said tall hedges would be a more natural sound barrier, instead of the current plan that's "higher than a prison wall."

In 2011, TxDOT polled nearby residents about the proposed wall. Of the 45 ballots distributed regarding Sound Wall No. 3, 26 respondents approved of the wall, three opposed it, and 16 didn't respond. But residents say they were not aware that the wall would be 20 feet tall or so close to their homes. (Goertz, for example, voted yes in 2011.) The descriptive information was available online and at public meetings – but the ballots themselves were very general, simply asking residents to vote on "a proposed sound wall in the proximity of your property." Pustelnyk said that the ballots were general because the details of each wall segment varied, but insisted that there was no effort to mislead or withhold information.

On Dec. 12, City Council unanimously passed a resolution, sponsored by Council Member Kathie Tovo, directing city staff to re-poll the neighborhood and work with the involved agencies concerning the disputed Sound Wall No. 3. Tovo emphasized, "By no means am I questioning the original process, or the construction of sound walls in other areas where people really want them." However, she said, "In this section, I do think that the people ... have very valid concerns." In order to change the current plans, Council would eventually have to rescind its 2012 approval.

But even the re-polling process isn't without controversy. Only owners of property directly across from the proposed wall will get a vote, excluding nearby neighbors like Ehlers, who says the wall will be visible from his property. Pustelnyk defended the limited polling, saying that only those most directly affected by the wall should get a say. And he repeatedly stressed that CTRMA does not have a position for or against the wall. "Walls have both positive and negative effects. It's not the Mobility Authority's or TxDOT's position to push for or against wall construction. Our role is simply to indicate that a wall is needed or is justified under the federal environmental laws, and if residents wish to have that wall constructed, then we construct it, as we are obligated to do." The final decision will also depend on whether changing the plans would affect the project's federal funding.

The city manager's office will update Coun­cil by Jan. 30, and if the polling opposes the wall, Council will consider its options. Unless they take further action, construction of Sound Wall No. 3 will begin as planned, in the summer of 2014.