Would legalization lead to a decline? 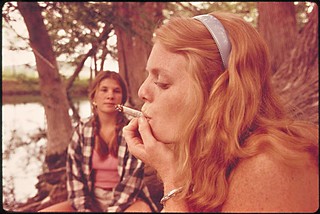 Smoking pot on an outing in the Cedar Woods, near Leakey, Texas, 1973 (Photo courtesy of Marc St. Gil/EPA)

News flash: Teenagers use marijuana more than any other illicit drug, a new report on adolescent drug use reveals.

According to the 2013 Monitoring the Future survey of drug use, a tool administered annually to thousands of American teens, nearly 13% of eighth graders, 30% of 10th graders, and more than 36% of 12th graders report having used marijuana during the previous year.

While those rates are slightly higher than teens self-reported in 2012, the question still remains, is pot use by teens actually increasing? That depends on how you look at the numbers. According to the survey authors, the percentage of teens who report having used marijuana during the previous year has been "drifting higher in recent years" following a "decade or more of fairly steady decline."

But for high school seniors in particular, use rates are now far lower than they were in 1975, the first year the grade was surveyed by MTF. That year, 40% of high school seniors reported using pot during the previous 12 months, a number that actually peaked at approximately 50% in 1979.

MTF has only started surveying eighth and 10th graders since 1991, a low point for pot use across all three grades. Those numbers then picked up throughout the Nineties – in all three grades – before dipping slightly, then rolling along, up and down, over the last two decades.

With the number of states that have legalized the use of medicinal marijuana on the rise, the report notes also that 34% of high school seniors who say they use pot, and who live in a medi-pot state, say that they get their dope from someone with a prescription; 6% of those students say they have their own prescription. "It thus appears that state medical marijuana laws provide an additional avenue of accessibility to the drug for teens," reads the report. That may be true, but since 1975 high school seniors have consistently reported that marijuana is "fairly easy" or "very easy" to get – indeed, if anything, the number of teens saying marijuana is readily available has declined somewhat over the last 15 years.

And whether that will remain the case as states consider broader legalization remains to be seen. Indeed, Washington and Colo­ra­do in November 2012 legalized marijuana for recreational use by adults and are in the process of hammering out strict tax-and-regulate schemes. Whether regulation will impact availability among teens in those states remains to be seen, though the folks with the Marijuana Policy Project suggest there is good reason to believe teen use will decline amid an environment of strict regulatory enforcement. Consider the steady decline in any alcohol use, which has steadily dropped across all three grades, from 88% of seniors in 1991 to roughly 69% now, and from a high of nearly 84% of sophomores in 1991 to 52% now. Cigarette use has seen an even more significant decline, from use by 63% of seniors in 1991 to just 38% now, and from 55% of sophomores in 1991 to nearly 26% now. "The results suggest that regulating alcohol and cigarettes is successfully reducing teen use, whereas marijuana prohibition has been unsuccessful," Mason Tvert, MPP's director of communications said in a press release. "By regulating marijuana like alcohol and cigarettes and enforcing similar age restrictions, we would very likely see a similar decrease in availability and use among teens."

With that in mind, MPP is asking the National Institute on Drug Abuse, which sponsors the MTF survey, to conduct a new study into whether legalized regulation schemes may positively impact teen pot use. "At the very least, this [MTF] data should inspire NIDA to examine the possibility that regulating marijuana like alcohol and cigarettes could be a more effective approach than the current system," Tvert said.