Point Austin: The Meanings of 'Affordability'

The new year signals changes in the life of Austin 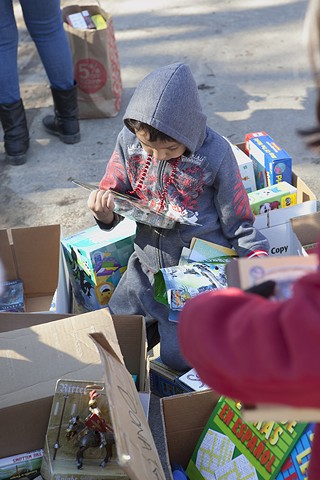 A child opens gifts at a holiday party for the victims of the Onion Creek and Yarrabee Bend flooding Halloween night. (Photo by Jana Birchum)

Over the Christmas holiday, I spent a lot of time corresponding and talking with potential City Council candidates, primarily to confirm whether each one is indeed considering a run for a seat in the new 10-1 Council to be elected next November (see "Very Early Returns"). I'm sure it's not a definitive list – there's plenty of time for additional entries, especially of the sort of hobbyists who volunteer to be hangers-on to the local political circus, as long as they receive a little free publicity in return. Just Keeping It Weird, yo.

These were very brief conversations, with no attempt yet to sort the wheat from the chaff, although several would-be candidates were ready to describe in a nutshell what they anticipate will be their campaign priorities going forward, and what they believe will be the most important issues facing Austin voters in the coming year. There were no real surprises: "quality of life," transportation, full representation, "affordability."

I've put a couple of those values in quotation marks, because I was again struck by the implicit differences in definition of the terms, depending on who was using them. In the simplest terms, "quality of life" can mean quite a different thing to someone living in Northwest Hills than it does to someone in Montopolis – perhaps only a difference in immediate emphasis, but with potentially a great deal of effect on what that person believes should be City Hall's priorities. The same is more strikingly true – and not just for Council candidates – of "affordability": what the term (and broader idea) means to an Austinite just trying to climb uphill to make ends meet, and to one whose primary ideological connection to city government is his property tax or utility bill, can be very different indeed.

There is no doubt that the city is changing rapidly, willy-nilly. In a recent blog post, Civic Analytics policy wonk Brian Kelsey posted some fairly stunning demographic statistics. Noting that the city has been No. 1 in job growth among big cities over the last decade (2001-12), presumably a good thing, Kelsey writes that it has inevitably meant a continuing influx of people hoping to share in that prosperity – a consequence greeted here with very mixed responses. A more striking result, at least to me, is that the economic changes have meant a dramatic flip in the Austin percentages of rich and poor (see "Austin's Growth," www.civicanalytics.com/austins-growth).

In other words, while many of us were effectively standing still, financially speaking – and here I'm definitely speaking for myself – our economic surroundings were changing dramatically around us, and we're steadily becoming a city that economically looks less like what we have thought of as Austin, and more like what is now San Francisco. Some people will welcome that, of course; others, not so much. But at a minimum, we need to be more aggressive than we have been in addressing issues of "affordability" if we want to avoid the sort of inequitable polarization that is now plaguing the City by the Bay, where the Haves and the Have Nots are increasingly at each other's throats.

No one possesses a magic formula, and complex problems require complex solutions. Our locally mixed fortune is but one instance of larger trends across the country, as summarized recently by Robert Reich: "America is now more unequal than it's been for eighty or more years, with the most unequal distribution of income and wealth of all developed nations. Equal opportunity has become a pipe dream." In recent years, that dismal trend has mostly been exacerbated at the federal level. Locally, we've taken a few good steps: trying to bring in a wider range of good jobs, tying city incentives to better pay and working conditions, promoting unionism to the limited extent allowed under union-busting state laws.

Voting directly to support affordable housing bonds is also a relatively small but important step; working to establish a viable mass transit system (where transportation increasingly requires as much as housing in the average family budget) is also important, although as a community we have waited so long to do so, that it will be a long time before those slow-moving plans make a substantial dent in our common expenses.

Notably, on the housing side, the same people and neighborhoods (and city officials) persistently clamoring for "affordable housing" are simultaneously doing what they can to obstruct the actual construction of affordable multi-family units in central city neighborhoods. I've seen and heard it among my own neighbors: newly prosperous residents opposing necessary, viable, supportive housing projects for working people because, as one neighbor put it, "We've already got enough poor people around here." Too often for many people, "affordable" has come to mean, in fact: "Affordable for me, but not for thee."

As we enter the new year, and a new political era at City Hall, it will be interesting to see what "affordability" and "quality of life" mean to the next generation of Austin voters and Austin public officials. I hope the changes will mean, at a minimum, that the best values of the old Austin can survive and thrive in the new.