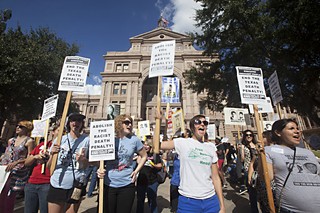 Of all Texas counties, Harris County has sent the most defendants to death row since 1976, when capital punishment was reinstated. But in recent years, Dallas County has surged forward, earning it the top spot for new death penalty sentences since 2008, according to a report released last week by the Texas Coalition to Abolish the Death Penalty.

According to the annual TCADP report, of the 55 inmates condemned to die since 2008, Dallas sent 11 (20%) to death row. That distinction is unsettling, given that Dallas County also leads the state in the number of exonerations established through DNA evidence: Through mid-2012, 24 men have been exonerated. "While most of Texas is moving away from the death penalty, Dallas County has emerged as a major outlier in its pursuit of the ultimate punishment, particularly for defendants of color," Kristin Houlé, TCADP executive director, said in a press release. "These troubling patterns directly counter Dallas' reputation as a leader in criminal justice reform."

Indeed, while the absolute number of new death sentences handed out in Texas remained low in 2013 – just nine new sentences were delivered, the same as in 2012 (up by one over the eight delivered in 2010 and 2011) – the use of the death penalty remains localized, and the imposition of the ultimate sentence on minority defendants remains high. In the last two years, five of the 18 people sentenced to death were from Dallas County. Travis County has sentenced just three persons to death since 2008, and none in 2013. And since 2008, two-thirds – or more – of all new death sentences were imposed on minorities. In Dallas County, for example, of the 11 men sentenced to die since 2008, eight are black and two are Hispanic. In Harris County, 12 of the last 14 defendants sentenced to death were black and the other two were Hispanic. Harris County last sent a white man to death row in 2004, according to the report.

Texas also marked an execution milestone in 2013, with the 500th execution since reinstatement. At year's end, the total had reached 508 inmates put to death since 1982, when Texas resumed executions; 16 inmates were executed this year, up from 15 in 2012. Nationally, Texas accounted for 42% of all executions in 2013, putting to death more than twice as many persons as the second most active state, Florida, which executed seven. On Tuesday, Dec. 17, the 39th and final U.S. execution of 2013 took place in Oklahoma; that marked the lowest total since 38 in 2008.