HIV/AIDS: Pushing Past the Plateau 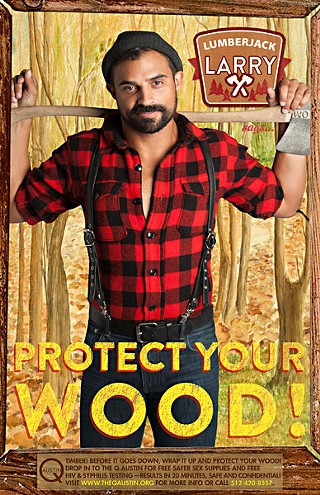 In an age chronicled by Facebook posts and six-second Vine videos, the persistent threat of HIV/AIDS barely registers. Even in LGBT media, the disease is most often addressed by the smiling faces of athletic men in drug ads. The lurking danger of the Eighties and early Nineties has somehow emerged benign. It's not easy to fight a monster that many have forgotten exists.

With the availability of antiretroviral therapy, new cases of AIDS have dropped dramatically since the peak in the mid-Nineties. At that time, widespread public information campaigns helped sharply drive down HIV contraction rates. Although incidences are stable in the United States, the rate of new infections remains troublingly high. In recent studies, the Centers for Disease Control and Prevention have reported approximately 50,000 new HIV infections per year.

"There is a lack of awareness," says AIDS Services of Austin Prevention Promotions Specialist Marcus Sanchez, "I think there's been a lot of indifference from what we've heard and seen doing outreach within the community. We hear [the disease is] not an issue unless it's a visible thing. More guys are concerned with contracting herpes or syphilis as opposed to a disease they've accepted as something that can be lived with. As important as the medical advances have been, it's also giving younger guys an excuse for not thinking about their behavior."

Sanchez's worries are confirmed by the latest Texas HIV Surveillance Report, a snapshot of the epidemic released annually by the Texas Department of State Health Services (DSHS). At first glance, the numbers seem low. In 2012, 252 new HIV infection diagnoses were reported in Travis County. Only 112 new AIDS cases were diagnosed in the same year.

A closer look at the numbers reveals some distressing trends. The DSHS report showed a 23% increase in new HIV infections in Travis County during 2012. In Dallas and Harris Counties, the percentage is even higher. And those numbers only show a part of the picture. The surveillance data does not include those tested anonymously (as opposed to confidentially) or those who have avoided testing altogether. Stigma is still a prominent deterrent – especially in communities of color.

"In POC [people of color] communities," Sanchez says, "stigma still plays a big role in that. In my [Hispanic] culture, it's something we don't talk about. I've had relatives who have passed away from AIDS complications. Families either lie about the cause of death or don't talk about it. People aren't getting treatment or getting tested because they don't want to be identified as being a drug user or gay."

To address the stigma, the Q Austin uses humor and references to pop culture. "Not to make light of HIV, but to make the conversation more comfortable," says Sanchez. Visitors to the Q's office first notice a prominent bookshelf, the Q's "sex wall," filled with bins of condoms and condom-safe lube. One container holds a stock of Trojan Magnums, labeled with a photo of Tom Selleck. The office Christmas tree is festooned with safer-sex gear. And the walls are lined with cheeky posters for the "Camp Q Crew" campaign, launched on Dec. 19. (See www.campqcrew.tumblr.com for more info.)

The campaign revisits the public service announcements that were common during the height of the epidemic. "I came up with the Husky [the Bear] character while I was applying for the job," says Events Specialist Jeremy von Stilb, "so I pitched the character as part of a portfolio of concepts. I haven't seen [an HIV prevention] poster in a bar in a really long time."

"Each of the characters has different targeted­ messaging," adds Sanchez, "We wanted to align all the characters into one storyline, so we could tie it with one campaign. Our volunteers now dress up as junior rangers."

The hope is to normalize the conversation. The PSA rollout will include plastering local gay bars with the posters. "People sometimes don't want to have these conversations," says Sanchez. "So many people assume things about others when they first meet. So if we put these conversation starters up at the bar, that's a good way for someone to start a discussion about the last time they got tested."

The trading card style posters can also be easily posted to social media. Von Stilb says, "we want to encourage people to advertise that they got tested as well. All of these younger people are on Facebook all the time, and it's an influence on how many of them make their decisions." Since social media also often propagates disinformation, part of the message is reinforcing that getting tested is safe, easy, and free.

Von Stilb says, "Finding where to get tested is sometimes very difficult. If you google HIV testing, the first three sites are [sponsored] ads that are encouraging you not to get free testing. They're for-profit tests, and a lot of the links are dead. And a lot of the testing schedules are out-of-date or really confusing." Sanchez adds, "We run into people who are surprised that we offer free testing. There are a lot of people who don't get tested because they just don't have the money to get tested; a financial barrier has been created because there is not enough accessible information."

Many of the most at-risk persons are also not aware that there can be a three-month period before testing is able to detect HIV. "A lot of new infections come from people who are in relationships," says von Stilb, "who think that because they are monogamous, it's OK to start having condomless sex. But the problem is that they don't get tested multiple times."

The dedication is starting to pay off. Von Stilb says the number of people getting tested at the Q is on the rise. Sanchez adds that the Q is now testing twice a week. "More and more people know about us because we have created that regular schedule," he says, "and they refer their friends to it or post about it on Facebook. We have more of a laid back feeling as opposed to clinics."

Although the progress is heartening, the group says there is still work to be done. Sanchez says, "We are always open to hearing what people want to talk about. This is a safe space for people in the community and we're here as a resource. We are open to people bringing their ideas to the table."

Von Stilb agrees, "It's us continuing to network and work with other groups. Instead of us telling them, 'This is what you need to do, you need to wear a condom or you need to get tested,' we are just presenting the information and staying in constant contact because they are going to have the solution. If the messaging comes from them, it's going to be a lot more effective. That's how empowerment works, it's not a top-down solution. If there's a solution to this, it's coming from the community."