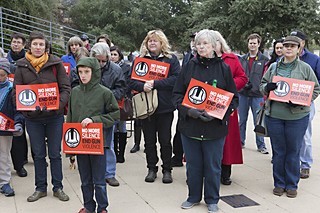 › Entering the holidays, there's no formal City Council meeting again until Jan. 23, but last Thursday (Dec. 12) they decided on – at least temporarily – the next phase of urban rail and the work plan for Auditorium Shores. See "Work Done and Happy Holidays!"

› Austin's 911 system went down on Dec. 16. Local emergency services used Round Rock, Pflugerville, and Williamson County's Commun­i­ca­tions Centers as backups until service was restored, and APD cops were deployed at major intersections in Austin. The city says the problem was an issue with the backup server.

› Austin ISD has decided which campus will host which of its new single sex schools next fall. On Dec. 16, trustees voted to turn Gus Garcia Middle School into the Young Men's Leader­ship Academy, while Pearce becomes the Young Women's Leadership Academy.

› Did you get your orange voter registration certificate yet? Travis County has mailed them all out, but estimates 14% will be undeliverable due to wrong addresses. If yours hasn't arrived, the county suggests you visit txapps.texas.gov/tolapp/sos/SOSACManager to update your address, or www.traviscountytax.org/goVoters.do for registration info.

› The Travis County Tax Office issued a press release Dec. 13 after outcry regarding the inclusion of former names on the voter registration cards. Local residents fear the extra names may cause confusion at the polls because of the new Texas Voter ID requirement. Travis Co. Voter Reg­i­strar Bruce Elfant says the inclusion of former names was mandated by law, but voters can submit a name change to correct the listing.

› Sen. Wendy Davis is pummeling GOP gubernatorial hopeful Greg Abbott for refusing to give a straight answer on what he thinks about GOP-inspired cuts to public education. Abbott has claimed he can't say where he personally stands, because he has to defend the cuts in court.

› For some weeks, the biggest pending headline in town was the fate of UT Longhorns football coach Mack Brown, under fan siege for a pedestrian recent win-loss record; Brown finally announced Dec. 14 that he'll step down following the Dec. 30 Alamo Bowl, after 16 years leading the team.

› The search for a new megamillion-dollar coach will fall to new athletic director Steve Patterson and President Bill Powers, who has endured his own trial by fire under barely concealed pressure by micromanaging Gov. Rick Perry and a couple of his appointed regents – but Powers got a reprieve last week, if not a vote of confidence, as the board and Chancellor Francisco Cigar­roa announced that despite a "strained relationship," Powers would stay.