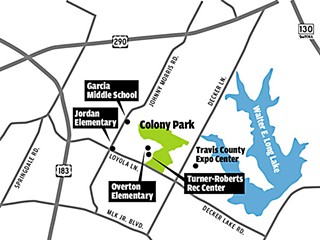 Like Goldilocks in the home of the three Bears, residents of northeast Austin told planners last week what designs were "just right" for Colony Park. "Block length" was a case in point: They decided an 800-foot block was too long, a 200-foot block too short, and a 400-foot block – which a pedestrian can circle in five minutes – just right.

The Dec. 9 meeting was the second of four scheduled to help plan a new mixed-use development on 208 acres of city-owned land in Colony Park. Funding for the plan comes from a $3 million Community Chal­lenge grant the city won from the U.S. Depart­ment of Housing and Urban Devel­op­ment's Sustainable Communities program. By late spring, the design team, led by Farr Associates of Chicago and local Urban Design Group, will finish the master plan, and initial construction plans will be permitted by year's end. Dirt could start to move in 2015, likely by private builders contracted by the city.

The Colony Park neighborhood and its sister, Lakeside, lie north of Loyola Lane and south of Highway 290, just west of the Travis County Expo Center. Between them, the city-owned land is a wild, hilly swath of grass and cedar. Children cut through the area to get to Overton Ele­men­tary, the recently reopened Turner-Roberts Recreation Center, and the multipurpose center next door. The civic buildings sit atop a hill on 50 acres of dedicated parkland the city carved off of its original 258-acre purchase. Maps shade it green and call it "Colony Park," but that's a misnomer – it's devoid of sports fields or playgrounds, amenities on its neighbors' wish lists. 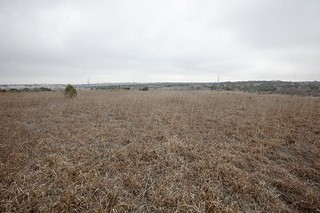 Residents will have a say in how this vacant land in northeast Austin will take shape. (Photo by Jana Birchum)

The public meetings involve residents from a much broader 15-square-mile area in northeast Austin that will be affected by the project. "You get to shape the future," Doug Farr told them earlier this fall. "In 2030 there will be 1,000 new families living here. Decisions we make today will shape whether we can get our kids to school safely and go places without cars."

At the October kickoff meeting, residents inventoried the area's existing strengths and weaknesses. Weaknesses dominated: absentee landlords, crime, a failing middle school, and lack of access to groceries and medical care. Farr's team then led an "image preference survey," asking neighbors to choose between pairs of photos: For retail, do you like the design of Second Street, with wide sidewalks and ground-floor retail, or do you like a Walgreens with a parking lot? "We will try to deliver things you like, and not deliver things you don't like," Farr said.

Many of the lowest-rated photos were of Colony Park today; an image of wide, treeless Loyola Lane was derided as looking "like West Texas." But the brightly colored, contemporary architectural style of the Agave neighborhood – part of the larger planning area – won big. "We're looking for something different" from the suburban ranch-style houses that dominate now, a resident explained.

In last week's meeting, 60 residents used keypads to vote for design styles in real time. They decided where to put the new development's residential driveways, how wide to build the streets, and how to manage storm water. At times, their feedback was contradictory. Residents have long wanted a grocery store, restaurants, and entertainment, but they voted against the residential density that would make those amenities possible. Duplexes, town homes, and row houses received low marks because they were associated with problems in existing multifamily structures. "We want prosperity, and we have enough low-income [housing]," one woman said. 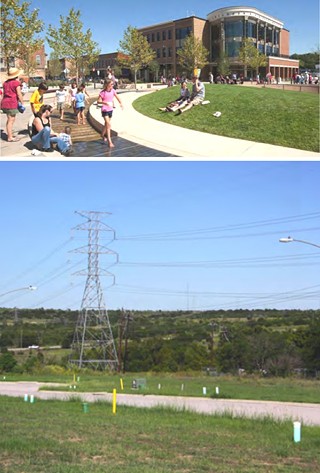 Residents were asked to choose between pairs of photos they'd like their neighborhood to look like. Can you tell which of these images rated highest and lowest for "First Impressions"?

Some of this resistance comes from the perception that northeast Austin is a dumping ground for cheap and subsidized housing. "We want to know what is really coming into our community," one resident said, suggesting the city had a hidden agenda. "The plan is already on the ground, right?"

"I'm sorry to disappoint you," Farr replied. "There is no plan," other than the one coming together that day.

But the city's original idea for the site – before the grant – was to fill it with low- and moderate-income housing. And clues about the city's current intentions for the land are reflected in the grant: 500 single-family and 250 multifamily units, 40% of them affordable to residents making 80% of median family income or below.

Whether affordable housing is an opportunity or a threat depends on who's talking. Home­owners at the meetings associate "affordable housing" with an influx of low-income renters. At the same time, some are worried that the neighborhood improvements will lead to gentrification and squeeze existing residents out. Any successful plan will have to avoid the extremes at both ends.

The neighborhood and design team have two more meetings to work out the details of a brand-new, mixed-use, mixed-income development. Affordability and density are two of the biggest areas where they'll have to make compromises to find what's just right.