Lehmberg NOT Removed: Déjà Vu All Over Again

Long list of dignitaries testify in defense of D.A. 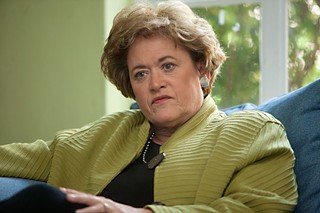 The State was represented by Travis County Attorney David Escamilla, in the person of assistant county attorneys James Collins, Sharon Talley, and Tim Labadie. Lehmberg's defenders were Daniel Richards seconded by his brother Clark (both sons of former governor Ann and attorney David). When Collins rested his case Wednesday morning, the defense immediately asked for a directed verdict, arguing that the State had wrongly employed archaic Prohibition law and had not proved its case; Peeples predictably declined, preferring to let the proceedings play out to the end. The defense began calling its witnesses Wednesday, a long and distinguished list of local attorneys, judges, and other dignitaries ready to testify to Lehmberg's character, competence, and continued fitness for office. It soon became clear that the entire list wouldn't be necessary – and a little before 4:30pm, following closing arguments, Peeples denied the petition for removal.

While removal lawsuits for public officials are not unknown – Peeples has presided over several such cases – attorneys could find only a single instance of removal on grounds of drunkenness, dating to the Thirties and using a law amended to the Local Government Code during Prohib­i­tion, when even possession of liquor was illegal.

Beyond the single April 12 DWI to which Lehmberg pled guilty, and for which she served her 45-day sentence, Collins, the county's chief litigator, laid out in his opening statement "six factors" the State believes should convince the court that Lehm­berg deserves removal: 1) the extent of her intoxication that night; 2) she "decided to commit crimes"; 3) her "almost unimaginable" bad behavior towards law enforcement officers; 4) her intoxication represents a pattern of conduct; 5) she has a pattern of lying about drinking and perhaps about other things "both in general and while under oath"; 6) she probably won't stay sober in the future, because she has promised to follow treatment but has not done so.

Collins had little trouble demonstrating the first three factors. Lehmberg had pled guilty to drinking and driving, and has repeatedly apologized both for that and for her "inappropriate and unacceptable" behavior to the arresting officers. But prosecutors have thus far had a great deal of trouble demonstrating the subsequent "patterns of conduct" of which they accuse the D.A. Both the medical witnesses they summoned, and their attempts to imply that Lehmberg hasn't sufficiently committed to her rehabilitation and treatment plan, seemed together to undermine their own case. Lehmberg's doctors testified, overall, that they believe she has an "excellent" prognosis for recovery, and her defense appeared to document that she has followed her doctors' recommendations and has in fact abstained from drinking since her final two glasses of wine – on the plane to enroll in an Arizona rehab clinic, Sierra Tucson.

Before he called the doctors, Collins spent much of Monday recounting, via two 911 callers and three Travis County officers, the already well-known events of April 12. After driving erratically on Highway 620 (the subject of the 911 calls), Lehmberg stopped near St. Luke's Church, where a deputy found her and summoned arresting officers. She was transported to the jail, where by her own admission she behaved abominably toward jail personnel – all of this captured and widely broadcast on video, which (mercifully) Judge Peeples said he would review privately. On Tuesday, Collins returned to this material while grilling Lehmberg at great length, pointing to quite minor inconsistencies in her current testimony and that of her sworn depositions, and asking her repeatedly why she had done this foolish thing or made that false statement on the night of April 12. Lehmberg replied repeatedly, with sometimes testy resignation: "I was intoxicated."

Between those reconstructions, Collins presented video depositions and recited testimony by two of Lehmberg's doctors on Monday, plus witness testimony Tuesday morning by Austin addiction specialist Dr. Herbert C. Munden. Although each witness was somewhat limited by not then knowing the current status of Lehmberg's treatment plan – that would come later, during her own testimony – each judged her prognosis for recovery "good" to "excellent." None thought the state of her disease – diagnosed variously as "alcohol abuse disorder, mild" or "chemical dependency, not physiological" – impaired her competency or abilities, or endangered the public interest. As for the State's implication that Lehmberg was "denying" her disease or "lying" about being an "alcoholic," Munden seemed perplexed. "Denial" is generally a symptom of chemical dependency, he said, "but that's not the same as lying." Moreover, he added, virtually everybody engages in denial of one kind or another.

In short, as Daniel Richards put it, the State seemed to want to retry Lehmberg's DWI, but to what end remained unclear. Judge Peeples was generally quiet, but asked a couple of questions of Collins that suggested he was also puzzled. "Are you asking me to predict the future?" he wondered, saying he didn't think he could anticipate another DWI. And by Tuesday, he was getting impatient with Collins' infinitesimal reconstruction of April 12. "Is this going somewhere?" he asked Collins.

"Then get there," said the judge.

In his opening statement, Richards had said that the State is basing its argument for Lehmberg's removal on the single intoxication standard of the Local Government Code. If that's to be the new standard, he continued, they had "better get busy" and start removing officials all over the county and state, if only to serve equal justice under the law. Many Texas public officials have received DWIs, without any motion for removal, he continued, and there are no grounds for treating Lehmberg differently. She has a constitutional right to know what the law is, and what the consequences are: "Not a list of factors they've just made up."