Then There's This: Turf Fight at Auditorium Shores

For a city that strives to be on the cutting edge of all things trendy, Austin lags behind a national shift toward creating more off-leash dog parks – what the Trust for Public Land has called the fastest-growing species of city parks in America, with Portland, Ore. leading the pack. Indeed, according to advocacy group Friends of Austin Dog Parks, Austin has steadily downsized its off-leash acreage while other cities have added more space. The shrinkage argument is amping up in advance of a Dec. 10 meeting of the Parks and Rec­re­ation Board, which is set to vote on a proposed redevelopment plan for Auditorium Shores. That plan calls for reducing the existing 18 acres of off-leash space to about four acres (up from the originally proposed three acres).

The iconic shoreline park has been a popular dog-romping spot for several decades. The stretch of open space has also featured in the city's long-running discussions about upgrading and improving the park as part of the Town Lake Metropol­itan Park master plan process, but funding shortages hampered those endeavors until concert promoters C3 Presents stepped up last year with a $3.5 million donation. Then it was full speed ahead on the Shores.

Under a partnership that includes C3, the Austin Parks Foundation and PARD, the makeover calls for new grass and an irrigation system, shoreline erosion controls, and a newly segmented park with a "main lawn" event venue on the east end, off-limits to all dogs, a "middle lawn" for other activities (leashed dogs only), and on the west end, an off-leash space with lake "launches" and other bells and whistles that dog advocates say they didn't ask for. PARD's Marty Stump, who's overseeing the park project, said some minor revisions to the off-leash park (including a "modest increase in size") will be released Friday as part of the backup material for the Dec. 10 meeting.

Assuming the plan passes out of the Parks Board, it would go before City Council on Dec. 12. But prickly proposals of this nature tend to get fussed over and delayed in order to, if nothing else, shine more light on the process. That would be the fair thing to do at this point, considering that Council already voted in June to alter the off-leash boundaries for Auditorium Shores, apparently without public input, and without a dissenting voice on the dais. Strange behavior for a council that likes to play up the city's no-kill status. The vote was 7-0, taken on the day Council formally accepted the $3.5 million donation from C3. (Here's where I should note that PARD officials and C3 insist that the monetary gift had absolutely no influence on the decision to amend the 1977 off-leash ordinance.)

With the ordinance change in the bag, PARD staff then held three public input meetings to outline the plan and receive testimony, which – no surprise – was resoundingly negative.

On Monday night, a group of dog-advocacy stakeholders gathered in a corner room of an enormous warehouse-turned-community-space in South Austin to discuss strategy in advance of the Parks Board and Council hearings. The group included people who are making their first foray into a city issue, and others who are old hands, including Bill Fras­er, a leader of Friends of Austin Dog Parks, Ken Altes, who introduced himself to the group as the guy who lost the battle to save the old Seaholm Power Plant for public use, and Cyndi Collen, Bouldin Creek Neighborhood Association president.

After the meeting, Fraser told me that he first entered the Auditorium Shores discussion in 2008, when the conversation centered on soil erosion and safety, as well as routine maintenance issues – easily resolved by adding trash cans and pet waste bags. Even then, he said, there was talk of moving the main gathering area for dogs and their owners from the east end to the west end, but there was never any mention of imposing new restrictions. "That conversation changed on May 1 of this year," he said, recalling a meeting of a small group of stakeholders called by a PARD staffer, who informed them of the donation and the new dog rules that would be imposed.

Fraser says he's most upset about how PARD is now framing the issue – that dog owners don't want to share the park, that they want access 365 days of the year, that they want this and that. "Carving up land and putting in barriers is actually taking acreage away from the rest of the community," he said. "Right now the park is open space, and we've always felt that it should remain that way. We did not ask for a million-dollar-plus investment, we didn't ask for barrier fences, cabling, launch pads – it was brought to us as 'here's what you're getting; take it and like it because this is the way it's going to be.'"

So, Austin, is this really how it's going to be?

The board will consider an Auditorium Shores redevelopment plan that will impose new leash restrictions on what is now an off-leash park. Tuesday, Dec. 10, 6pm, City Hall, 301 W. Second. Council: Are We Having Fun Fun Fun Yet?
The show must go on, but where exactly? 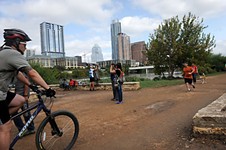