Fran Keller rejoices at the small blessings of freedom ... while wondering about her future Fran Keller with her daughter Donna (Photos by Jana Birchum)

Following her release from prison last week, the first item that Frances Keller bought was a toothbrush. For more than two decades, she'd been allowed to use only a stubby, prison-issued brush that required her to stick nearly her whole hand into her mouth in an attempt to clean her teeth. (Prisoners are not allowed real toothbrushes, because they could be used to fashion a weapon.) Released from prison, nearly 21 years to the day after she was convicted, Keller bought her first real, long-handled toothbrush – actually, she bought a two-pack, she said on Monday morning, in the living room of her daughter's house. Now, she said, she can walk around the house while brushing her teeth. She is free. And still she can barely believe it. "I'm still living in a dream," she said. "It's like, you have these dreams – and some of them come true."

For more than two decades, Keller hoped she would some day be free – that someone would finally realize that she was innocent of the terrible crime she'd been charged with back in 1991. Despite their repeated protestations of innocence – and the fact that scant evidence suggested a crime had even happened, let alone linked them to it – both Kellers were tried, convicted, and sentenced to 48 years in prison.

From prison, Fran Keller wrote letters, day after day, to countless attorneys, pleading that they reinvestigate her case; she was innocent, she told them. None replied. That was, until Austin defense attorney Keith Hampton not only took interest in her case, but filed a comprehensive appeal that ultimately – after a hearing this summer and an agreement with Travis County District Attorney Rosemary Lehm­berg that the Kellers had received an unfair trial back in 1992 – led to Fran's Nov. 26 release. 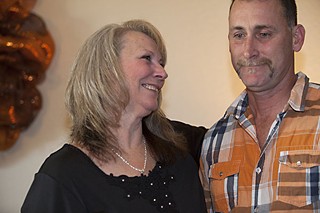 Fran and her son Steve

That morning, Keller was told by guards at the Gatesville prison to start packing; Just after noon she was returned to the Travis County jail where she was processed – with fingerprints and mug shots – before finally being released that night. Reporters waited at the front entrance to the jail while Keller, dressed in clothes the correctional officers supplied (a new pair of jeans, a man's button-down shirt, a ball cap, and a coat), was secreted by a deputy out a back door and walked into a nearby parking garage where she waited for her daughter, Donna Bank­ston, to pick her up and drive her home.

Sitting in Bankston's living room on Mon­day morning with her daughter and son, Steve Newland, Keller was by turns both exultant and anxious. She was now sleeping on a real bed – "It's like going from sleeping on concrete to sleeping on air!" she said – eating real fruit (she was eager to tear into a party tray of fresh, sliced fruits she'd purchased at the grocery store), and using not only a real toothbrush but also real soap ("liquid soap," she noted). Keller's granddaughter, who was just a toddler when Keller went to prison and who is now a hairdresser, had given her a color and cut, and Keller had given herself a real manicure, carefully trimming and then painting her nails a soft shade of pink.

And for the first time in decades, Fran was able to spend Thanksgiving with her family. Last week, being booked back into jail prior to her release – an experience that she says brought back the trauma of her first booking there, more than 22 years ago, shortly after she and Dan were first accused of assault – Keller said she wasn't sure that she would actually be released, let alone in time for the holiday celebration. "I've been away from my family for so long, you just want your family around you," she said. "I've got a great family; I'm just blessed."

Keller worries still about the future. There remains more to the story of Fran and Dan Keller, yet to be written. The agreement between Lehmberg and Hamp­ton that prompted her release must first be filed and transmitted to the Court of Criminal Appeals for approval; if and when the CCA signs off, the case will be kicked back to Lehmberg for a chance to retry the couple. If Lehmberg declines to do so, then Hampton still must fight to have the couple formally exonerated. "It scares you to death that you might have to go back," Keller said, worry and fear clouding her face. "They put me in for something I didn't do then, and they could put me back in now. It's scary."

But Keller is also determined to continue to fight to prove that she never committed a crime. And she's eager to see Dan walk out of prison and into the arms of his family, as she has been able to do. Although they are no longer legally married, Fran hopes that hers is among the first faces he sees on the day that happens. She says she'll have with her a present just for him: the second of the two new toothbrushes she purchased last week.