Lehmberg's Next Ordeal: Too Drunk to D.A.? 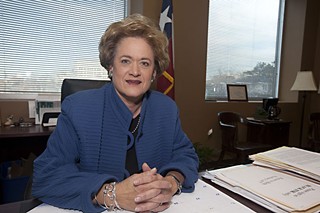 On Monday, Dec. 9, visiting Judge David Peeples will preside over a hearing on the question of whether there exist sufficient grounds to remove Travis County District Attorney Rosemary Lehm­berg from office. The hearing is the next stage in the "bifurcated" process Peeples established to determine whether Lehm­berg's April DWI arrest and subsequent conviction should disqualify her from further service as D.A. It is a civil proceeding, in the wake of a lawsuit initially filed by local attorney Kerry O'Brien, in accordance with a provision of Texas law that "any resident" can file a removal suit. For various technical reasons, that suit was dismissed and a similar action is instead being pursued by Travis County Attorney David Escamilla (and his staff), representing the state of Texas.

The first stage in the bifurcated proceeding would in theory have been a jury trial to determine whether Lehmberg had indeed been intoxicated; since the D.A. had pled guilty to that charge, Peeples ruled (and the two sides agreed) that that question has been settled, and it remains only to determine whether Lehmberg's intoxication renders her unfit for office. Lehmberg and her attorneys wanted a jury to hear and determine that question, but Peeples ruled that the discretion on removal belongs to the judge. Lehmberg submitted to the judge's ruling while reserving the right to appeal on the jury issue should she find it necessary to do so after Peeples' eventual decision.

Although it's not exactly rare for public officials to be arrested on DWI charges, it is extremely rare that such matters eventually result in a removal action. Some officials resign, others weather the storm and go on working, but the attorneys could find only a single precedent – dating back to the Thirties – in which an official was forced by legal action to leave office. Lehmberg has said that she will step down at the end of her current term (Jan. 1, 2016), but Peeples could rule that she must resign immediately (in which case the governor would make an interim appointment and a successor would be chosen in the November 2014 general election).

According to pleadings in the case, two provisions of Texas law come to bear: a state constitutional provision (Article V, Sec. 24) that certain officials can be removed for "habitual drunkenness," and a narrower provision of the Local Government Code that declares a single instance of "intoxication on or off duty caused by drinking an alcoholic beverage," may be sufficient for removal (Sec. 87.013.03). Lehmberg's attorneys say the constitutional provision means that only a demonstration of habitual intoxication would be sufficient grounds to oust her from office; the county's attorneys argue that the same constitutional provision (which continues, "or other causes defined by law") enables the Legislature to add other grounds, as specified in the Local Government Code – and therefore the DWI conviction can in principle be enough for a judge to order removal.

Not resting on that provision, Escamilla and his assistants have left little to the imagination: They subpoenaed Lehmberg's recent liquor receipts and those from her visits to the Alamo Drafthouse theaters (which serve beer and/or liquor), and they required both a blood test and a hair sample to help determine whether she drinks excessively. As they read the law, even evidence of private intoxication ("on or off duty") can trigger a removal action, and presumably they intend to tell the judge that either the single DWI or the evidence of extensive liquor purchases (widely reported in local media) should bear on his determination of Lehmberg's fitness for office.

In their pleadings, Lehmberg's attorneys have argued that beyond the single, acknowledged DWI, there is in fact no evidence that Lehmberg is guilty of "habitual drunkenness," and that plenty of character witnesses can testify that she has performed her duties with sobriety, competence, and indeed distinction. Her attorneys submitted to the court a list of such potential witnesses, among them lawyers prominent in Travis County Democratic politics – including her predecessor Ronnie Earle and a couple of local judges. Those witnesses were ruled irrelevant to the intoxication question, but Lehmberg's team may well call on them next week.

In other words, the case has political reverberations far beyond an ordinary DWI, not the least of which was the early demand from Governor Rick Perry that Lehmberg resign, and the subsequent withholding of funding for the D.A.'s Public Integrity Unit. Should Lehmberg resign before the end of her term, Perry would appoint her replacement. That prospect has roiled much of the local Democratic Party, which is strongly represented on both sides of the current lawsuit. Lehmberg's defense team is led by Daniel Richards, son of former Governor Ann Richards; although Richards himself has not been a prominent political player, he's seconded by Catherine Mauzy, daughter of former state Senator Oscar Mauzy and a democratic party activist, and by former Travis County Dem chair Chuck Herring. On the plaintiff side, County Attor­ney Escamilla has himself been prominent in local Dem politics – he's not arguing the case directly (that falls to chief litigator James Collins), while second chair Mack Martinez is also a party activist – not to mention the subject of his own notorious DWI incident several years ago, after which he briefly resigned before Escamilla rehired him to head the C.A.'s Family Violence Division.

In that highly charged context, neither side has been saying much on the record out of court, although that may change when Peeples eventually issues his ruling. Beyond the courtroom, Lehmberg's supporters have not been shy about charging Escamilla with piling on the D.A. in a situation that has already exposed her to a stiff jail sentence and plenty of public mortification. Escamilla's defenders say he is required to pursue the legal process to its conclusion, and that he had no choice but to take up and pursue the removal lawsuit and let the court determine the outcome.

Beyond the eventual verdict is the prospect that the entire affair has created a whole new standard for local politicians, who have been known to tipple a few on the campaign trail, which inevitably runs on well-lubricated fundraisers and social events. Will O'Brien's removal lawsuit become the new bipartisan standard, i.e.: You sued me so I'm suing you?

To find that out, we'll have to wait for the next Travis-County-public-official-DWI.