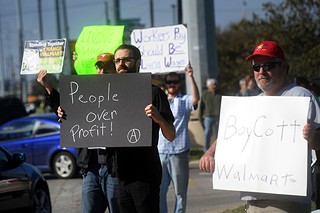 Austin activists joined a national protest effort on Black Friday to call attention to Wal-Mart's poverty wages for its workers, which forces the retail giant's low-income workers to rely on public assistance and charity to make ends meet. (Photo by John Anderson)

› Some will also convene on Friday, Dec. 6 as the Central Corridor Advisory Group, to "consider the priority sub-corridor(s) to receive Austin's next transit investment" (i.e. urban rail).

› Austin Aquarium managing member Ammon Covino was sentenced on Monday to a year in federal prison for conspiring to illegally purchase lemon sharks and spotted eagle rays in Florida for display in Idaho. Meanwhile, his brother, Vince, says the Austin Aquarium is on target to open next week, though the site still lacks permits to do so, or to display protected animals. See "Aquarium," for more.

› Austin ISD released its annual State of the District address by video on Dec. 2. In it, Super­intendent Meria Carstarphen praised increased graduation rates and declining removal statistics. However, there's still no word on when the board of trustees will deliver its annual superintendent evaluation – now three months late and counting.

› So much for the Circuit of the Americas just being for the one percent: Jeff Foxworthy (of "you might be a redneck" fame) has announced the venue will host the inaugural RedFest in 2014, his three-day celebration of all things bubba, headlined by Tim McGraw.

› The family of Cedar Creek High School student Noe Nino de Rivera filed a federal lawsuit last week against the Bastrop school district, Bastrop County, and the deputy who tasered Nino de Rivera during a Nov. 20 hallway altercation, causing him to fall and incur a serious head injury – he remains in a medically induced coma. Officials insist he was interfering with officers, but eyewitnesses reject that charge.

› At press time, a lawyer for condemned inmate Rodney Reed was arguing to the 5th U.S. Circuit Court of Appeals in New Orleans that his death sentence should be overturned. Evidence points to another killer, his defenders argue.

› Lawyers for another Texas death row inmate, Larry Swearingen, on Wednesday argued before the Court of Criminal Appeals that never-before-DNA-tested items of evidence should face scientific scrutiny before Swearingen can be executed. For more details see Newsdesk, Dec. 4.

› T.R. Fehrenbach, the head of the Texas Historical Commission and renowned for his triumphalist history of Texas – Lone Star: A History of Texas and the Texans, and other books – passed away Sunday, Dec. 1, at the age of 88.