Freedom for the Kellers

Fran and Dan released after 21 years for 'satanic abuse' Late on Nov. 26, just two days before Thanksgiving and nearly 21 years to the day that she was sent to prison for a crime that few still believe ever actually happened, Frances Keller walked out of the Travis County Jail, freed on a personal bond. She was greeted by her grown daughter, Donna Bankston, eager to embrace her mother after more than two decades of separation.

Keller and her husband Dan were each convicted and sentenced on Nov. 30, 1992, to 48 years in prison, for the alleged sexual abuse of 3-year-old Christy Chaviers, who, in the summer of 1991, was an infrequent drop-in at the couple's home-based day care near Oak Hill. After a day at the Kellers' that summer, Christy told her mother, Suzanne Stratton, that Dan had spanked her. With additional pressing, first by her mother and then by therapist Donna David-Campbell, that initial allegation soon morphed dramatically – first into an allegation of sexual abuse and then, by the fall, into far more fantastic allegations – including that the Kellers took Christy and other children on plane rides to Mexico where they were abused by various people, that Fran cut off the finger of a gorilla at Zilker Park, that the Kellers performed a satanic bone-replacing ritual on one child, and that the Kellers forced the children to watch them sacrifice babies and small animals. Ultimately, Campbell concluded that Christy was a victim of "ritual abuse."

The Kellers were among hundreds of child-care workers across the nation who, in the Eighties and Nineties, were accused of being part of a network of Satan worshippers who abused children taken to day care. In 2008, the Chronicle began a reinvestigation of the case against Fran and Dan Keller. We discovered that Austin Police and prosecutors were embarrassingly credulous in their belief that the children had been abused in all manner of unbelievable – often literally impossible – ways, despite the fact that there was scant evidence to suggest any crime had ever occurred at all.

In fact, the only physical evidence to suggest Christy might have been abused came in the form of testimony from a then-novice emergency room doctor, Michael Mouw, who examined Christy in August of 1991. At the couple's trial just more than a year later, Mouw told jurors that he found deformities to Christy's genital area that could have been caused by sexual abuse. When he was contacted by the Chronicle for what eventually became our cover story on the case ("Believing the Children," March 27, 2009), Mouw said that not long after he testified against the Kellers, he realized that what he thought were injuries were in fact "normal variants" of female genitalia. He said he had been trained in medical school and in the ER to have a pro-police/prosecution bias, and that with the training and experience he's gained in the intervening years, he knows now not only that he was wrong about what he thought he saw, but also that he was not qualified in 1991 to conduct a pediatric sexual assault exam or to draw any conclusions about whether abuse had taken place. 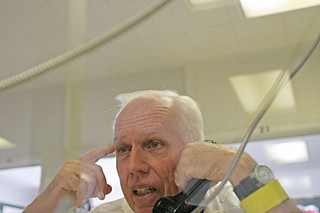 That Mouw provided inaccurate medical testimony for the state at the 1992 trial was among the claims included in an exhaustive appeal filed on Fran Keller's behalf in January by Austin defense attorney Keith Hampton. A hearing on the issue was held in district court in August, leading Travis County District Attorney Rosemary Lehm­berg earlier this month to agree with Hamp­ton that Keller had received an unfair trial. (An appeal raising the same claims was filed last week for Dan, and the agreed findings related to Mouw's testimony are also applicable to Dan.)

In short, the state has agreed that the medical testimony presented at the Kellers' trial was false, was material, and likely affected the outcome of the trial. As such, its inclusion violated their rights to due process. In a press release, Lehmberg said that she agreed to the relief because of the "crucial nature" of Mouw's testimony, and the "reasonable likelihood that his false testimony affected the judgment of the jury and violated Frances Keller's right to a fair trial."

The fact that Lehmberg and Hampton have agreed to that finding, and agreed that the Kel­lers conviction should be overturned, triggered a provision of state law that allowed a district judge to grant a personal bond to release them from prison while their appeal moves through the process. The agreed findings will be forwarded to the Court of Criminal Appeals for final approval; once that happens, the case will be returned to Lehmberg to decide whether to retry the case.

Fran Keller, now 63, was transported to Travis County from the Gatesville Unit of the Texas Department of Criminal Justice on the morning of Nov. 26, and that afternoon Judge Cliff Brown signed off on her release. Roughly six hours later, as reporters waited in the lobby area of the county's Downtown jail, Keller was released through a back door and picked up by her daughter. Dan, who turned 72 in prison on Friday, Nov. 29, is expected to be returned to Travis County and finally released early this month.

While the state has agreed that the Kel­lers' 1992 trial included the false and damaging medical testimony, Lehmberg has nonetheless decided to oppose the other arguments raised by Hampton on appeal – including that Austin Police failed to turn over exculpatory information from their investigation of the alleged abuse, that when interviewing Christy about the alleged abuse the state used techniques known to produce unreliable narratives, and that the Kellers are actually innocent. In short, it appears that the impact of Mouw's testimony – excluding the only piece of physical evidence against the couple – has, to date, had only limited impact on the state's perspective on the case. "Under the exacting standards for a bare claim of actual innocence ... Dr. Mouw's false testimony regarding physical evidence of abuse neither constitutes affirmative evidence nor unquestionably establishes [the Kellers'] innocence," reads the state's response to the remainder of the writ.

Notably, it's the second time in as many weeks that Hampton was instrumental in the release from prison of a woman accused in the Nineties of ritual abuse. Hampton is among the lawyers representing members of the so-called "San Antonio Four," who were accused of ritually abusing two nieces of one of the women, Liz Ramirez, whom Hampton represents. In that case, one of the alleged victims recanted her story and, as with the Kellers, the case featured false, and material, medical testimony. Three of the women were released from prison last week, the fourth was paroled last year. See "'Ritual Abuse,' the San Antonio Four, and Public Hysteria."

Whatever comes next, Fran's family is happy that, for the first time in more than two decades, they have been together for Thanksgiving. "Everyone is going to be in the same house – together," Bankston said. "Thank God."