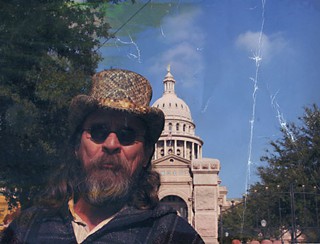 In all the current fuss over Wendy Davis, Greg Abbott and their ilk, you may have missed the announcement of yet another candidate for governor of Texas. George James "Rattlesnake" Ramsey, it turns out, is also running for governor, and in order to do so is "establishing the Constitutional Labor Party, to represent those people who work for their money."

During a phone interview a few days before Thanksgiving, Rattlesnake touched on a wide variety of topics: the Founding Fathers, the French Revolution, Timothy Leary, his time as class president in middle school, "Hypo-Christians" (i.e., "a hypocrite that uses the cloak of a Christian") and "the establishment" (also known as "the system," "the ruling class," and "satanic assholes").

I made the mistake of saying, "Yes, sir" – Rattlesnake promptly cut me off, explaining that he is "most definitely not 'sir,'" and that "sir" does not reflect God's will. What does he prefer to be called? "Rattle­snake," "brother," "dude," "ese," or even "asshole" – but definitely "not 'Satan' or 'sir.'"

Alas, later I slipped again, and Rattlesnake was even more adamant: "Fuck 'sir.' I will call you 'sir' if you want to be called Satan, that's who's called 'sir.'" My apology provoked yet another rant: "No! You're not sorry. The government's sorry. Everybody says 'sorry' instead of saying 'pardon me' or 'excuse me,' and the government's putting that through the TV, and people, sitting there being couch potatoes, take in all the hypnotism that the government puts on there. It's called subliminal messages, which is against the law actually, but the government does it, and I know they're doing it, because everywhere I hear people saying 'sorry' for everything."

He then elaborated on how the government ... okay, well, honestly, I have no idea what he was going on about. Rattlesnake makes his living as a painter, carpenter, remodeler, and handyman, or, as he explained, "I just work. I'm a house doctor. My mom wanted me to be a doctor, that's why I say I'm a house doctor." He also says he graduated from Southwest Texas State in 1978. But he's not necessarily finished getting degrees, adding, "maybe one of these days I'll get an honorary degree." (He also appears to lead or have led a band called the Sidewinders – Rattlesnake, get it?)

Across the top of the website it reads "FUCK THE BUSH NEW WORLD ORDER." I asked him if he truly thought that President George W. Bush was capable of establishing a "NEW WORLD ORDER." This question, I learned, revealed my ignorance of "the system." That is: "Bush is a minion. Obama is a minion. And they're both minions to the same thing."

The website of the Constitutional Labor Party is somewhat more professional. Next to a picture of himself and below "Rattlesnake for Governor," Ramsey provides a brief bio and political epiphany: "I spent from 1998 to 2008 protesting Bush outside the state capitol. When I was president of my eighth grade class at Olmito,  just north of Brownsville, we took a class trip to Austin and Six Flags in Dallas. When we were in Austin (1967) we went to the Capitol and got to see the Legislature in heated argument. Right there and then I decided that I would be governor and president. For many years I forgot this idea."

Ramsey claims to have already filed his gubernatorial paperwork (there is as yet no record of that on the Secretary of State's web site). He plans to take advantage of the pulpit that the campaign will offer, and proudly added that he'll be running for president in 2016. Recognizing that many people are upset and unhappy with our current political situation, he's optimistic about his chances: "I expect the Constitutional Labor Party to be a behemoth, the largest type of thing that's called itself a party to date."

Ramsey wasn't fazed by the notion that some people might find him over-the-top, extreme, or even flat-out crazy. "You can quote me all you want to, because I haven't said anything that I feel ashamed to say anywhere." He insisted that his campaign isn't a publicity stunt: "Nothing other than honesty and seriousness about what I'm saying. I am speaking exactly my mind without any kind of hidden agenda."