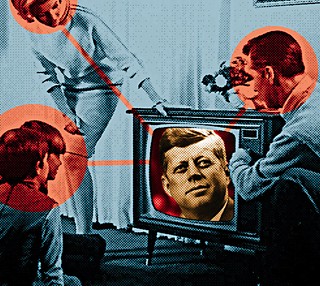 When the editors realized this issue would fall on that fateful Nov. 22 anniversary, 50 years on, I was uncertain what the Chronicle might do that would adequately commemorate the event, or would say what hadn't already been said many times before.

I shouldn't have worried; always trust your writers. The assignment was very simple – I asked a range of good thinkers and writers to write, very briefly, on "John F. Kennedy and/or the assassination," in any way they chose. Not everyone I asked accepted; I even tried to get a real youngster or two to respond with something like, "This is ancient history!" – but those I asked declined with an email shrug. (Tells you something about time passing.)

For those who asked for a little more direction, I added, "I'm hoping that the space limitation will encourage writers to say what they believe is most vivid, permanent, or important about those years, or that event."

So they have done. Some are elegiac, some skeptical, some historical. I hope they inspire as much reflection in the reading as they did in the gathering and editing.