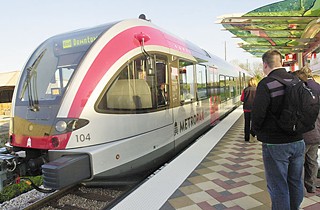 On Friday, Nov. 15, Project Connect – the Capital Area Metropolitan Planning Organ­ization's regional planning initiative – made its official recommendation to Mayor Lee Leffingwell's Central Corridor Advis­ory Group regarding the proposed next high-capacity transit investment, recommending the East Riverside (south and east on East Riverside Drive) and Highland (north along Red River Street) sub-corridors as the top prospects for initial urban rail development. East Riverside was recommended because of its "high population and employment density" as well as its expected continued growth; Highland because of its potential growth, along UT's eastern campus boundary, the new medical school, and the anticipated redevelopment around Austin Community College at the former Highland Mall.

Not all transit advocates welcomed the decision. Scott Morris of the Central Aus­tin Community Development Corporation said, "We're disappointed in the initial recommendation in that it really does not serve the residential densities in Austin north of the river. We applaud the selection of East River­side sub-corridor ... but we don't see where in this recommendation they get to go to. ... The Highland corridor ... totally bypasses the existing residential density."

Mike Dahmus, former member of the Urban Transportation Commission and supporter of Austinites for Urban Rail Action, also criticized the Highland decision. "Every­body that looks at Austin and that knows anything about transit knows that [Lamar and Guadalupe is] where you put the trains if you want them to be a success, which is what you need for your first line. You want your first line to be very heavily used, so that you get the chance to do a second line and a third line and so on," he said. "The problem is, if you pick the wrong first line, you never get to make a second line, or at least you have to wait a generation or two for the voters to give you another chance."

Capital Metro spokesman John Julitz said, "We understand that there are people who are disappointed and convinced that there are better options out there, but ... from the Central Corridor team's perspective, this is absolutely the very best option."

AURA executive committee member Dan Keshet called the Highland recommendation a "head-scratcher," and said, "It is not the transparent and data-driven process that we were hoping for." He voiced concerns over how quickly the project is moving forward and said it needs more examination. Added Morris, "We'll continue to promote awareness of the jobs, population, and transit density of Guadalupe-North Lamar, and seek to improve this initial recommendation by pairing Guada­lupe-North Lamar with East Riverside. That may give the people of East Riverside more places to go, and allow an interconnection of these two very strong corridors."

CCAG will review the recommendation and public comments before making its own decision, expected in December. City Council will need to take official action by June, 2014, for the plans to make the November ballot.

Project Connect's recommendation is posted on its website (www.projectconnect.com), with an online survey and evaluation tool for public input until Dec. 4. A "Community Conversation" for more input will be held Tuesday, Nov. 26, 7-9pm, also online and on Channel 6.