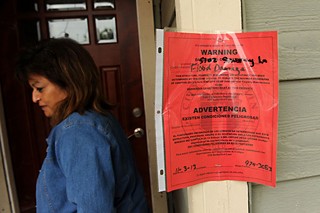 A woman stands outside a flood-damaged home on East Stassney, one of many red-tagged houses warning of dangerous conditions and advising residents to use caution when returning to their homes. See "Flood Recovery Continues," or our photo gallery, for more flood coverage. (Photo by John Anderson)

› With much of the city still recovering from the recent floods – and a formal declaration of emergency – City Council's meeting today (Thursday) will be very brief, with all zoning and planning matters postponed, and adjournment scheduled for noon so officials and staff can get back to recovery work. For more on emergency aid, see "Flood Recovery Continues," and www.austintexas.gov.

› There have been two reports of flood-ravaged properties in South Austin being burgled, but no reports of looting in the affected neighborhoods, Austin Police Chief Art Acevedo said this week. Police presence and neighbor diligence have kept properties and belongings safe, he said. The police department will maintain a heavy presence in the area as the cleanup continues.

› Election night held few surprises in Texas, with all nine constitutional amendments and the local affordable housing bond passing with comfortable margins (see "A Victory for Housing"). The four-way race in Texas House District 50 goes to a run-off between Democrat Celia Israel and Republican Mike VanDeWalle.

› Some Austin ISD teachers were shortchanged last week after the district's payroll software failed, under-calculating wages for 325 teachers and incentive pay for another 385. Voters approved $7.5 million in bonds to replace the decade-old system in May, but it's being held up by lawsuits.

› The Independent Citizens Redistricting Com­mission moved closer to a final-draft map this week, still trying to maintain one African-Amer­i­can and three Hispanic voter opportunity districts, while responding to complaints that other districts remain too severely gerrymandered across neighborhood lines. See "Redistricting."

› Does Texas' Defense of Marriage Act allow same-sex couples married elsewhere to divorce in Texas? Or would that force the state to recognize unions it has outlawed? Those are questions now facing the Texas Supreme Court, which on Tuesday heard arguments in two same-sex divorce cases. The state says that they cannot legally divorce, and their only remedy is to have their union declared void. For more on this, see Newsdesk, Nov. 5.

› Arizona State University Athletic Director Steve Patterson has reportedly accepted the same position with UT-Austin, to replace longtime AD DeLoss Dodds when he steps down next Aug­ust. Patterson will be paid over $1 million annually – about twice what it would take to continue support for the Texas Memor­ial Muse­um, scheduled to lose its $600,000 UT budget next year.

› The Texas Supreme Court today (Thursday) is set to consider whether Google can be forced to hand over the identity of an anonymous blogger – a supposed employee of an auto-dealer support operation, who talked smack about the company online. See the Newsdesk blog for details.