A Victory for Housing 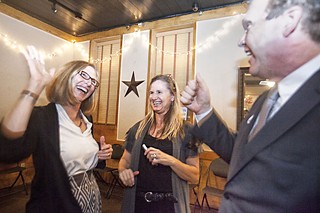 This time, affordable housing advocates had something to celebrate Tuesday when they gathered at Scholz Garten to watch the election returns for the city's $65 million housing bond proposition. A bare-bones ballot, unlike the one in 2012, helped create a clear path to victory, which was all but declared shortly after 7pm when the early vote returns handed the Keep Austin Affordable campaign a 59.1% edge that continued to climb as election day returns trickled in. In the final tally, housing won 60.7% to 39.3%.

Last year's narrow defeat of a housing bond prop served as sort of a mixed blessing for Austin, housing advocates said. "It was almost like we needed to lose," said Mandy De Mayo with HousingWorksAus­tin. "We needed that wake-up call. All of us in the affordable housing community know how important housing is, but we didn't communicate that to anyone. We didn't let other folks know."

So they began talking to people. This spring, before City Council even placed the bond question back on the ballot, advocates had already re-strategized their efforts to educate voters. They spoke to community groups and civic organizations, faith congregations – anyone who would listen. "It was a hard lesson to learn, but this is what came out of it," De Mayo said above the celebratory din of the crowd at Scholz. She credited Mayor Pro Tem Sheryl Cole for pushing the ball forward a second time (although Cole would later tell supporters that she initially was apprehensive about putting housing bonds back on the ballot so soon after voters' rejection). "She was the one who pulled it together and said, 'We're going to do a real campaign. We've got to let people know this is what affordable housing does for your community.' So that's what we did," De Mayo said.

Without question, adding a human face to housing made for a better campaign message, one that was told through the formerly homeless, the working families, and seniors who benefited from the 2006 housing bond funds. And the human face made for a more informed electorate. "This really represents the values of Austin," said campaign manager Elliott McFadden, who will catch his breath only briefly before assuming his new position as executive director of Austin's bike share program, which launches this month. "The citizens want a city that makes room for everyone, at all income levels. A lot of people had interpreted [the 2012 loss] as a sign that Austin had changed, but what we found from our polling is that people just need to know how these funds are going to be spent." Without other distractions on the ballot, McFadden said, "We were allowed to have that conversation, and people responded to that."

Council Member Laura Morrison described that voter response as "a huge, wonderful, and beautiful statement about Austin ... an Austin that is diverse, has all income levels, and makes sure we invest in the safety and shelter of people so they can take advantage of the wonderful opportunities in this city."

The next step is determining how to spend the money that will ultimately produce about 3,500 affordable housing units. As things stand now, nonprofit providers across Austin are sitting on mothballed projects in need of funding that they can then leverage with outside dollars. Foun­da­tion Communities' Walter Moreau said his nonprofit has immediate plans to build a small addition to Garden Terrace, an efficiency apartment complex for individuals earning less than $26,250. Ann Howard, executive director of ECHO (Ending Com­mun­ity Homelessness Coalition), said her group will seek a slice of the pie to invest in Permanent Supportive Housing – a combination of supportive services and housing for homeless men and women. The voter-approved bond money, she said, gives the community a tool "to really end homelessness instead of manage homelessness."

Though turnout was light – 14%, in the end – campaign consultant David Butts picked out a couple of noteworthy trends from the early vote tallies: women outnumbered men in turnout (rare in city elections, Butts said), they outnumbered men in favoring the housing bond, and one out of five votes for housing came from voters between ages 18 and 45, an age range the campaign specifically targeted as part of its get-out-the-vote efforts.