Then There's This: 'A Decent Wage'

Pay Requirement may be inked into city incentive deals 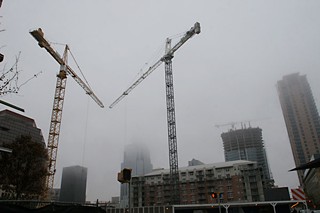 Incentive deals often translate to construction jobs, but at what cost? (Photo by Jana Birchum)

City Council today (Thursday, Oct. 24) is prepared to pass a far-reaching measure that could raise the bar on economic development agreements the city brokers with companies that expand or relocate their operations here.

What's more, the local work force may stand to gain from the financial carrots usually reserved for the private firms: The proposal would require companies to pay employees and construction workers a minimum wage of $11 an hour, with construction workers eligible to receive potentially higher prevailing wages on projects.

Not everybody is tickled pink with the prospect of higher wages and other perks for workers. Mayor Lee Leffingwell, for one, asserted at a Council work session Tuesday that the wage requirement would be a job-killer for Austin. "The people who are going to get hurt are the people looking for jobs," he said. And the area chapters of the Associated Build­ers and Contractors and the Minority Con­tract­ors Trade Associ­a­tion Alliance have asked for more time to review the proposal because the final details were not released until Friday afternoon. But because the contractor groups have been part of an 18-month stakeholder process that included Austin Inter­faith and the Workers Defense Project, and because the votes appear to be in place to pass the measure today, a postponement doesn't look likely. Council Member Mike Martinez is sponsoring the resolution (Item 56 on the agenda) with co-sponsors Kathie Tovo and Laura Morrison. Although the proposal needs just one more vote to pass, Workers Defense Project's Gregorio Casar, who's lobbied for passage, says six votes are entirely possible, with everyone but the mayor backing the resolution.

The proposal calls for amending a "firm-based incentive matrix" – what the city uses to determine the eligibility of a firm seeking incentives – to include wage requirements for construction workers and employees hired by the company. Firms would also be required to provide health care and domestic partner benefits, as well as workers compensation and 10 hours of OSHA safety training.

The amended matrix would give prospective companies more certainty about the city's expectations. "We wanted to make it clean and clear and add it to the matrix so companies knew what they were dealing with," Martinez said by phone Wednesday morning. He noted the Greater Austin Chamber's willingness to sign off on the proposal as long as there was some wiggle room for companies.

As it's currently proposed, firms seeking financial incentives may apply for exceptions to one or more of the requirements. If a two-thirds Council majority agrees, the company would get a pass. That's assuming they've got an attractive alternative plan – US Farathane is most often cited as one recent example. When Council tried to wring an $11-an-hour commitment out of the car parts manufacturer last year, the firm successfully touted a plan to hire less-desirable workers, such as ex-felons or homeless individuals looking for a fresh start.

The proposed amendments are particularly necessary, Martinez said, to avoid last-minute negotiating from the dais. "If you look back at the 14 economic development agreements we've ever done, almost every one is different in a subtle way because of what Council decided to add at the 11th hour," he said. "It really was like making sausage at the last minute on the dais. We wanted to put all of this out front, and that's what the Chamber told us – tell us the rules up front so when we recruit these companies we can tell them."

Minority contractors say they oppose the wage requirement because of the financial toll it would have on their businesses. Paul Saldaña, speaking on behalf of the minority contractors alliance, says it's clear that an $11 wage "is morally the right thing to do," but small minority businesses don't have the financial cushion to pay those types of wages on the front end. "We're the ones who end up funding these big projects for the first 90-to-120 days, out of our pockets because we're the first ones on the job," he said. "If the city wants this to apply to the big guys, then make them pay for it up front." To that end, Martinez has added a companion resolution (Item 55) that directs the city manager to identify potential third-party lending sources to help subcontractors cover their costs.

Reminded of Leffingwell's warnings of economic doom if the wage and benefits proposal passes, Martinez responded, "Are those jobs that pay less than $11 an hour, that don't provide health coverage and domestic partner benefits, are those the jobs that we really want in Austin? Do they actually provide an economy here, or do they draw on the economy because they don't have health care, because they're not paying a living wage? That, to me, is the crux of the conversation ... I agree that quality of life starts with a job, but I think it starts with a good job, a job that starts with a decent wage."