The More (Maps) the Merrier!

Almost a year ago, and after many false starts, Austin voters opted to carve the city – for representative governing purposes – into 10 City Council districts. If you believe in bumper stickers, that move was both an attempt to shed finally a racist history (during which minorities had few or no opportunities to choose their own representatives), and a promise to usher in a new structure of power that would escort the old guard back to its West Austin redoubts and give the voiceless margins a voice in local government for the first time.

That promise is now increasingly close to being realized (or not). A little more than a month remains until Austin-at-large is presented with our first geographic Council districts – and all across the city people are scrambling to make sure the final map effectively represents the idealistic rhetoric of the citywide campaign for single-member districts. Or at least their personal interpretation of that rhetoric.

Not everyone possesses the steely determination, attention span – or time off from their night jobs – needed to sit through all of the meetings of the Independent Citizens Redistricting Commission, the group of citizens chosen to gather public input and draft the district maps. So here, on these pages, is a brief overview of the currently proposed ICRC (draft) map, some of the main issues observers have raised with that map, and a few of the most prominent alternatives that have been proposed by the people themselves, bringing their suggestions to the commission.

The ICRC has a target deadline of Dec. 1 for its final map, which needs to be confirmed and readied as the basis for Nov­em­ber 2014 elections. But there remains time to register complaints and bright ideas alike; the public input meetings will offer Austinites more time to present their own maps to the commission, or to use large maps that will be on-hand at each meeting. (The commission hopes to establish a public tutorial for the mapping software, but that will not take place at the public input meetings.)

As of press time, there are four more public meetings scheduled. The Travis Coun­ty Precinct 4 meeting is Saturday, Oct. 26, 10:30am-4:30pm, at the Southeast Lib­rary, 5803 Nuckols Crossing Rd. The Precinct 1 meeting is Wednesday, Oct. 30, from 6:30-10pm, at the Asian Amer­ican Resource Center, 8401 Cameron Rd. Two final public input meetings will be held Nov. 13 and 14, at locations yet to be determined. 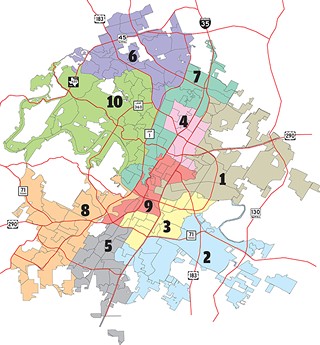 The ICRC accepts all public testimony (and drafts), considers suggestions, and posts the material on its website. The commission also continues to gather input, and alternative maps, through its website: www.austinredistricting.org.

The current draft map, as released on Sept. 28 by the Independent Citizens Redistricting Commission, for public review. It does appear to create three or four minority opportunity districts on the Eastside, but residents in other neighborhoods have complained that the remainder is effectively a gerrymandered map. For example, District 7 spans a thin strip from Lady Bird Lake to Pflugerville, and District 9 manages to combine Barton Hills with the Mueller Development. Across the city, several neighborhood groups have objected to being split between districts, or combined with neighborhoods with which they say they have little in common. 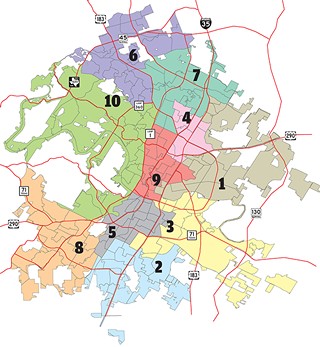 One of the alternatives to the ICRC draft that has emerged with some popular support is this map, drafted by Zilker Neighborhood resident Lorraine Atherton, who took it upon herself to map out all 10 districts. The Atherton map, which respects traditional Austin boundaries like Lady Bird Lake and major roadways, visually tracks a little more rationally than some of its counterparts. Groups dismayed with the official preliminary map have stressed the districting directive that the ICRC maintain "communities of interest" in the form of logical geographical regions, which is something this map tries to do.*

In the absence of an endorsement by Austin Neighborhoods Council, the map has been adopted by a group calling itself the "Compact Districts Coalition." Representatives from the CDC stress that their membership is continuing to grow, and so far it includes representatives from Bouldin, Oak Hill, Barton Hills, Rosedale, Heritage, Highland Hills/Balcones, Hancock, North University, Travis County, Zilker, Galindo, South River City Citizens, Bryker Woods, and Hyde Park.

But the map has its detractors. Peck Young of AGR has strongly criticized the map, saying that it would create only two minority-opportunity districts (one African-American and one Hispan­ic), which does not reflect Hispanic demographic strength. In a recent email circulated to AGR members, Young urges them to help block the CDC map, saying it "must be stopped."

Note also that in smoothing district boundary lines to conform to major roadways, this map now would split several voting precincts between Council districts – feasible if not ideal, according to the County Clerk's office.

The Compact Districts Coalition proposes a border between Districts 1 and 4 that mirrors the border proposed by the ICRC, except for the deletion of Precinct 248 (Wooten).

There is also a handful of maps drafted by neighborhood groups that confine themselves to their own regions. For example, while the Northwest Austin Coalition has proposed two Northwest districts, in a letter to the ICRC the group said bluntly that it had no interest in suggesting any other districts. Likewise, the Oak Hill Association of Neighborhoods has submitted a map of a proposed Southwest district, steering clear of drawing any others. 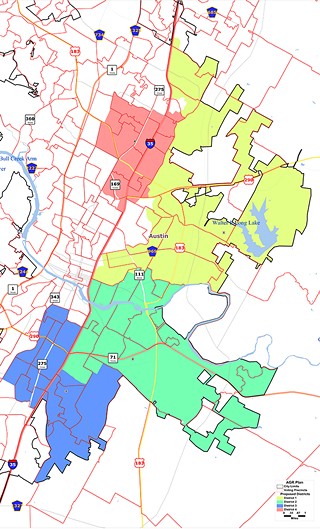 Of course, drafting one or a few districts can be relatively straightforward; the problems multiply when drafters follow the implications of a partial map to try to make the rest of the map work, and have to address neighborhood boundaries elsewhere.

Austinites for Geographic Representation proposed its own map (AGR consultant Peck Young has attended each ICRC meeting with a roll of maps that is unfurled and discussed during every break). Significantly, it proposes four minority opportunity districts – three Hispanic and one African-American. Like the ICRC, drafters stressed the need to draw these districts first, as a method of empowering historically disenfranchised populations and undoing the city's "gentleman's agreement" (unofficially reserving two of the current seven Council seats for minority members) right from the start.

AGR, which drafted the ordinance and carried the petitions that got 10-1 on the ballot, was initially alarmed by the ICRC's draft map, but has since said that it supports the preliminary map, though it advocates more work on the African-American opportunity district (District 3 in the ICRC map). 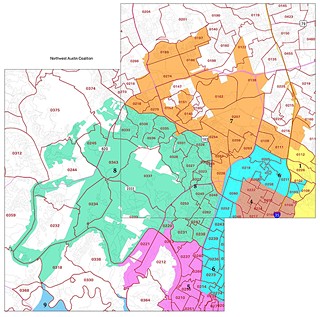 The recently formed Northwest Austin Coali­tion has remained steadfast in its desire to focus solely on its portion of the city, and has drafted two Northwest districts accordingly. The draft carries a "Disclaimer" (in part): "Our maps are focused on the Northwest portion of the city only. ... NWAC is only concerned about the orientation of these two districts and will not advocate for the orientation of other areas of the city." After a chilly reception to the map at a recent special-called meeting of the Austin Neighbor­hoods Council, Jason Meeker, who lives in the Northwest and is an ANC representative, explained that the larger NWAC map got the "worst reaction of the night" and may have unintentionally illustrated the pitfalls of drawing a map with a singular purpose. He says that while the NWAC map may (or may not) be good for Northwest Austin, it isn't good for the rest of Austin, and such a myopic view is ultimately detrimental to the process. 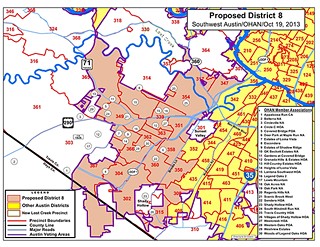 This Oak Hill Association of Neighborhoods map proposes a Southwest district that, most significantly, eliminates the West Austin and Zilker Park regions currently included in the Southwest district drawn by the ICRC. There has been an outpouring of local support for the OHAN map from Oak Hill residents like Western Oaks Property Owners Association Vice President Glenn Ross, who wrote to the commission in support of the OHAN map saying, "Frankly, we have been screwed by the city, Imagine Austin, and Capital Metro in the past, and we are really looking forward to a district that encompasses all of Oak Hill where we can have a representative that listens to our needs."

You can view all the maps currently submitted by the public here.