Prop. 6: Strange Bedfellows on Both Sides 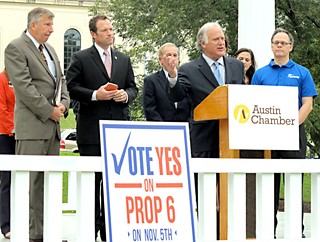 For decades, Texans have bemoaned leaking pipes across the state and a lack of coherent thinking about water planning. With Proposition 6 – a constitutional amendment and a plan to put billions into the state's crumbling and drought-wracked infrastructure over the next half century – November voters have a chance to put their money where their mouths are. Sierra Club Lone Star Chapter Water Resources Coord­in­ator Jennifer Walker said, "We don't think that Prop. 6 is a solution to all our water supply challenges in this state, but we think that it's a good step toward addressing some of the issues."

The proposal is based on the 2012 State Water Plan, authored by the Texas Water Development Board. It lists $53 billion worth of projects the state needs over the next 50 years, with local water authorities estimating the state will need to cover half of that. So during the last legislative session, lawmakers passed House Bill 4, which places Prop. 6 on the November ballot. If approved by voters, it will establish the State Water Implementation Fund for Texas, or SWIFT, and place $2 billion in its coffers, to be loaned out to regional authorities for projects approved under the water plan. According to former Texas Environmental Quality Commission Water Utilities Division Director Steve Walden, having a centralized fund will cut loan costs, especially for smaller entities. He argued it will also encourage more large scale public-private partnerships and statewide thinking, rather than local agencies paying premium prices to build infrastructure in "onesies and twosies."

According to Luke Metzger, executive director of Environment Texas, the legislative push to create the SWIFT really began two years ago: "2011 was the worst single-year drought in Texas history," he said. "But the legislative session ended by May so we hadn't really seen the worst of it yet." Even though the Tea Party made gains in the 2012 election, by the time the 2013 session started, "the drought had gotten so bad that pretty much every lawmaker woke up and realized that something had to be done."

During legislative debate, the clash came down to funding. House Natural Resources Committee Chair Allan Ritter, R-Nederland, initially proposed that all water users pay a tap fee. Another proposal was to levy a tax on bottled water, but that was quickly shut down by soda industry lobbyists. Ultimately, it was Lt. Gov. David Dewhurst who broke GOP orthodoxy and proposed tapping the Rainy Day Fund. The end result is a measure that comes with bipartisan support.

"One of the things that I from time to time criticize the state for is whether or not we're doing enough to build the infrastructure for the future," Sen. Kirk Watson, D-Austin, said. "This is an example of Texas doing better." He argued that Prop. 6 is a very Austin measure scaled statewide – something that's good for the economy while preserving the environment.

Rep. Jason Isaac, R-Dripping Springs, argued there was historical and environmental precedent for investment. "Sixty years ago, the state legislature responded to the worst drought on record by passing legislation that led to the building of many of the reservoirs you see today around the state. Now 60-some odd years later, we have the worst drought of record, and the Legislature has led by passing what is now on the constitutional ballot."

Like the Democrat/Republican confluence of supporters, Metzger admits the pro-Prop. 6 campaign has led to some strange bedfellows. Environment Texas is on the same side as BP, Shell Oil, and multiple chambers of commerce. Their advocacy comes in no small part from business self-interest, with corporations already expressing concern about how they can keep going with no water. While it's an odd experience, Metzger concedes that having companies on board undoubtedly helps. "It's not like Katrina, where you had poor-people advocates asking for the money. Here we have some of the most powerful people in the state twisting arms to make this happen." Not that he thinks that this is necessarily the beginning of a beautiful friendship. He said, "We're in the middle of a lawsuit against Exxon, but on some of these water issues, we tend to agree."

But if the "pro" campaign has seen some strange alliances, the organized "anti" group is no less motley a crew. The Nix Prop 6 campaign includes two 2010 gubernatorial candidates: Libertarian Party nominee Kathie Glass and arch Tea Partier Debra Medina. Familiar local names include anti-sprawl developer Brian Rodgers and perennial small-l libertarian "independent" gadfly Linda Curtis. The core arguments are split between progressive environmentalism (dubbing it "a $2B-plus slush fund of incentives, up for grabs at the front end by the growth lobby,") and Tea Party rhetoric like that of Rep. Van Taylor, R-Plano, who argues that any spending of the Rainy Day Fund would ding Texas' credit rating.

Locally, the Save Our Springs Alliance has given the antis some environmental credentials, after its board voted 8-0 to oppose Prop. 6. On Oct. 17, SOSA Executive Director Bill Bunch got a chance to make his arguments at a League of Women Voters debate on the issue (the League, it must be noted, endorses Prop. 6). Just because there are empty reservoirs in West Texas, he argued that's "no reason to hit the panic button." Calling the water plan's projects "a wish list of big-ticket items that will take water from rural areas to the cities," Bunch wrote them off as nothing but a gimme for developers. The plan, he said, is "a mirage ... most of the money is to increase supply from an already overstretched source."

Bunch was also critical of the plan for only setting targets, not firm numbers, for conservation and recycling projects. However, Metzger argued that those soft targets are a lot better than what is in place. "The 2012 state water plan only calls for 11 percent of state funding to go towards conservation, while HB 4 increases that and says it has to be 20 percent conservation, and another 10 percent for rural and agricultural conservation." Moreover, Metzger argued that the clearest path to conservation is to patch and replace the state's leaking, half-century old pipes. "Some cities are losing as much as 25 percent or 50 percent of their water from leaks, and that's a clear area where we can invest and repair our existing facilities."

For Walker and the Sierra Club, conservation will still remain key, mostly due to changes in how agriculture, industry, power generation, and residents consume water. She said, "You're already seeing that manifest in some of the draft numbers for the next water plan, which will be out in 2016." Moreover, Prop. 6 requires that the water plan's projects be reprioritized according to worth and need. Even then, they will still have to go through the regular checks and balances of the planning process. Walker said, "It's not like they can go out and justify building huge reservoirs that nobody needs. Because if people are paying any attention at all, they're going to say something about it."