Trying to get to yes on a $65 million question 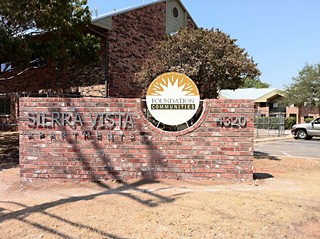 Foundation Communities opened Sierra Vista apartments on South Congress in 2012 after buying and renovating the property (formerly Shady Oaks) with a $3 million assist from housing bond money. Rental rates here range from $615-775 per month; the complex provides an after-school and summer program for children, adult education classes, access to a community garden, and is within walking distance to St. Elmo Elementary. (Photo courtesy of Foundation Communities)

Pity the poor city bureaucrat who has to try to explain the affordable housing bond proposition at community meetings without appearing to take a stand one way or another. Because no matter how bland the presentation, there's going to be someone in the audience who'll call them out for putting a favorable spin on what is supposed to be an "information session."

John Goldstone was that person at Monday night's community meeting, the third of four sessions held this month across the city prior to the Nov. 5 election. (See "'Chron­icle' Endorsements" and other election information) When it came time for questions from the small group of residents gathered in the Dittmar Recreation Center in South Austin, Goldstone asked: "Is there anyone on the panel who's actually opposed to the [proposition] – in other words, a 'no' vote?" Three city employees sat expressionless at a table at the front of the room. That's a question that can't be answered, one responded. Goldstone went on to ask them if there had been any discussion at the city about changing the informational material to show what the impact would be on property taxes and rents. "We are looking at adding supplemental materials on our website," City Capital Planning Officer Mike Trimble responded.

That would be helpful, Goldstone said, because "the correct information is not being disseminated. I'm not saying you people [are responsible], but these materials are misleading."

It's these types of public exchanges that are making affordable housing advocates nervous. Last year, a $78.3 million bond election failed by just 7,000 votes – and that was without any organized opposition. This time around, with a $65 million bond proposition on the ballot, a group called Travis County Taxpayers Union has organized against the measure. And though it's a low-budget opposition campaign – basically a one-man-band run by Don Zimmerman, a libertarianish Republican who's made a few runs for public office – it carries all the bells and whistles (a "taxpayer rape whistle," to be precise) designed to get Zimmerman's political brethren riled up, no matter how offensive the tactics. In last year's bond election, the Taxpayers Union did not specifically target the housing bond; rather, it put all its marbles into defeating the proposed medical school, which won handily. So maybe the group's losing track record will bring housing advocates some luck at the polls this year.

The pro-bond campaign, Keep Austin Affordable, is running an all-hands-on-deck operation and phone-banking like there's no tomorrow. But no matter how critical the housing situation or how supporters frame the message for voters – e.g., an estimated 38,000 poor-to-moderate-income families are in need of affordable housing, and there are 2,000 homeless children in the AISD system alone – there is always a definite segment of the electorate that will vote no. Outside the Dittmar Rec Center Monday night, a housing advocate expressed concern about the potential outcome. "It's neck-and-neck right now," he said.

You wouldn't know it by the fundraising. According to the Oct. 7 filings with the city clerk's office, Keep Austin Affordable had most recently raised $150,000 in campaign contributions. Perhaps the campaign staff has had some luck appealing to developers' guilt, as there's been a good amount of money raised from high-end builders, as well as the Real Estate Council of Austin, title companies and others in the big-business line of work. On the other side, the Taxpayers Union had raised $3,150 in the last reporting period, which included a $2,000 contribution from Jim Skaggs (who helped bankroll a successful anti-rail campaign several years back), plus a $3,000 loan from Zimmerman. The group has $3,059 in available funds, while the pro-bond group is left with $93,639 – evidence of this being one extremely high-stakes campaign.