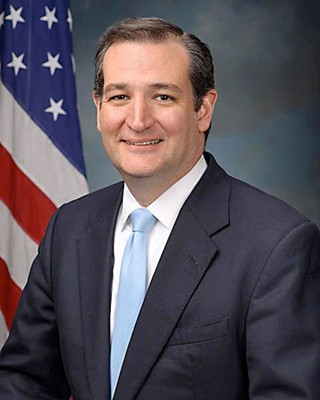 When Texas freshman Sen. Ted Cruz filibustered the federal budget to derail health care reform, his intention to cripple the federal government seemed clear. But not according to Cruz. As the Senate and House leaders thrash out a deal that will end the impasse, in the world of Sen. Cruz, it was all the Democrats' fault.

It's pretty easy to work out what Cruz is thinking. His press office – arguably staffed by the hardest working people in politics – is infamous for sending out daily briefings and releases. During the shutdown, they placed all the blame on Democrats, particularly the Obama administration and Sen­ate Majority Leader Har­ry Reid. The headlines of the missives speak for themselves:

• Oct. 4: "Reid and Obama Trying to Make Shutdown as Painful as Possible"

• Oct. 7: "President Threatened to Veto FEMA Funding Even as He Holds a Presser on its Behalf"

Cruz's argument was forged in the "stop hitting yourself" school of politics. Even though health care reform has been deemed constitutional by the U.S. Supreme Court, and gained effective voter approval during the last presidential election, it's supposedly Obama's fault that the Republicans refused to fund government. Asked about his boss' role in the shutdown, Cruz communications director Sean Rushton said, "He didn't want the government to shut down. It's a shame Democrats want 100% or nothing."

Travis County U.S. Rep. Lloyd Doggett gave Cruz a sardonic affirmation: "Senator Cruz is correct that he is not the sole cause of this outrageous government shutdown. That responsibility is shared by every Republican Member who has enabled him."

As a de facto head of the Texas Tea Party caucus, Cruz's tactics were simple: Propose to fund one part or other of the federal budget, then complain when the Democrats refused this piecemeal approach. Rushton put all the responsibility for this on Obama: "The President mentioned a number of unfunded essential priorities last week. We're working to fund those he identified so we can return to the harm Obamacare is doing to working people."

The list of departments that Cruz was prepared to fund – the military, veterans affairs, national parks – seem to be a portent of what Tea Party guru Grover Norquist intended when he talked about making government so small he could "drown it in a bath tub."

Yet in that short list of departments he deemed worthy of funding, former Texas Solicitor General Cruz made no mention of criminal justice. From day one of the shutdown, Attorney General Eric Holder instructed federal prosecutors to suspend civil prosecutions. Wednesday's last minute deal between Senate Republicans and Democrats meant criminal prosecutions weren't ended as well; the federal courts were scheduled to burn through their operating reserves by Friday.

This all raises one pivotal question: If Cruz is distancing himself as fast and as much as possible from the shutdown, how can he claim credit for it when he runs for re-election – or higher office? While the economy stalled, Cruz was busy fundraising for future campaigns. His grandstanding is paying off with his core audience of evangelical Republican presidential primary voters. Last weekend, he won the presidential straw poll at the Value Voters Summit. That poll has been called by many the first real indicator of the GOP presidential nomination. But since the same highly unscientific barometer was won by Mitt Romney in 2007, and Ron Paul in 2011, Cruz may not want to pack his bags for the White House.

Moreover, his numbers are plummeting everywhere else. The shutdown fiasco has been most Americans' first real taste of the Cruz brand, and they seem to be recoiling. According to a Gallup Poll held Oct. 3-6, Cruz's filibuster did raise his national profile. More people know who he is well enough to form an opinion (62%, up from 42% in June) – but they don't like what they see. In October, 24% of respondents say they viewed Cruz favorably, down from 26% in June, while those who view him unfavorably doubled, from 18% to 36%.

This was also before Cruz's latest controversy. In a fit of chutzpah, on Oct. 13 Cruz attended a Tea Party rally at the National Mall in D.C. to protest the closure of the World War II Memorial – another symptom of his shutdown. Cruz was photographed near banners carrying the Confederate flag and the logo of the Oath Keepers, an anti-government militia.

In fact, in a bad sign for Republicans generally, Gallup finds their support cratering. Their favorability has hit an all-time low of 28%, while 62% of people polled had a negative view of the GOP, up eight points since September. At the same time, Democrat favorability is low but relatively static at 43%, with only 49% holding a negative view – and that number has been dropping.

Meanwhile, Cruz seems hellbent on alienating his own party leadership. As Senate Minority Leader Mitch McConnell, R-Kentucky, was announcing the deal, Cruz committed another chamber faux pas by holding his own press conference, praising the House's budget suicide tactics while fulminating that the Senate had failed America.

Doggett had no sympathy for Republicans reaping this particular whirlwind. "Their attempt to deny our lawful right to access affordable health care has failed. Now the only question is how much more damage they will do to the country while searching for some new rationale to justify their shenanigans."