Council: Grow Your Own! 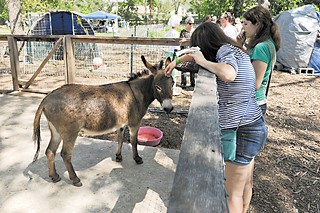 On its face, City Council's agenda today (Oct. 17) is not particularly imposing – just 81 items when recent meetings have routinely stretched into the triple digits – but there will be plenty here to keep everybody occupied. Items 14 and 75 (a post-4pm public hearing) concern the proposed revised regulations covering "urban farms," and unless it's postponed, the controversy that has pursued these regs is certain to boil over into the hearing. Urban farm advocates want better clarity in what is and is not allowed on small holdings; Eastside neighborhood opponents are vehemently denouncing the burgeoning urban farm movement as "gentrification" and a "land grab" in organic clothing.

It may take a while to get to that argument, if debate stalls first over Items 2, 3, and 73 (also a public hearing), over whether and how to revise "impact fees" for water and wastewater infrastructure. While the fees have been adjusted historically to encourage development away from the Edwards Aquifer, since the Formula One brouhaha some advocates – backed by three different city commissions – have been pressing to equalize the fees everywhere, and as high as possible.

Also on tap, for the first time, is a lengthy revision and update to the Special Events Ordinance (Item 29). It's extensive and complicated, and Council didn't have time for a briefing at its Tuesday work session – an update on Project Connect took precedence – so I'm betting this one will either get postponed or only introduced for discussion. If they start to pick away at it, the Item could become its own special event.

Council did spend plenty of time Tuesday working over in exhaustive detail whether they should or should not put a fork in the pilot program allowing overnight use on certain bike trails. Because of low use and high police patrol costs, Mayor Lee Leffing­well and Council Member Kathie Tovo have proposed the pilot program be ended. It's not certain, but after a compromise proposal by Austin Police Chief Art Acevedo on Tuesday, a consensus might be emerging to leave open for safety reasons certain high-demand bike passages (e.g., on Lake Austin Boulevard at MoPac) that should be patrollable without additional police resources.

What else is doing? The proposal returns to extend the Density Bonus program to the Rainey Street area, with certain tweaks in mind (Item 32); the sandstorm over a Parks plan to enforce cemetery decoration rules may generate another "staff and stakeholder" review (41); Council could designate an official "Red River Cultural District" from Sixth to Ninth streets (36); and the fishies headed to Austin Aquarium may receive official protection: A proposed resolution (37) would ask staff to report on "the regulatory authorities that provide safeguards for marine animals that are maintained in an aquarium." (See related story.)

The South Lamar (Taco) PUD returns (52, third reading), and so does the Hot Texas Swing Band: Wear your dancin' boots.