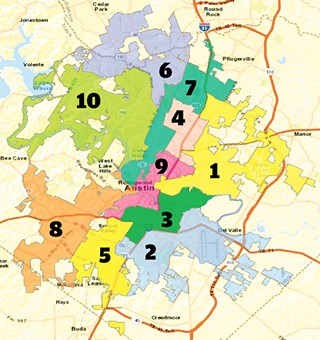 The current draft City Council district map proposed by the Independent Citizens Redistricting Commission, to be discussed in public input meetings during the next weeks. Much of the current debate concerns the central city districts (3,4,7,9); residents have complained that they divide communities of interest and violate traditional neighborhood boundaries. A more precise, interactive version of the map is online: www.austinredistricting.org/maps/interactive-preliminary-map.

When single-member City Council districts were voted into existence by Austin voters last November, it was in a swirl of outsider rhetoric. The "People's Plan" – i.e., "10-1" as opposed to "8-2-1," also approved but by a lesser margin – promised to give those on the outskirts of city power a voice that the plan's advocates said had been denied for far too long.

Translating that ideology into the actual business of drawing maps has left many in the middle (politically and geographically) dismayed. During its map-drawing session last month, the Independent Citizens Redistricting Commission (also created in the same vote) worked from the outside in – first solidifying the minority-opportunity districts east of I-35, and leaving the more central portions of the city for later. Working from the edges in is a rational jigsaw puzzle strategy, and makes sense in basic demographic cartography. But in this case, the strategy has agitated the most traditionally vocal groups in city politics.

Across the city, numerous neighborhood associations have expressed strong reservations about the preliminary map. Though some NA boundaries remain intact, others have been sliced in two, and others have been separated from their traditional geographic allies. For example, the Allandale neighborhood is divided into two districts and separated from other associations with presumably shared interests up and down the Burnet Road corridor. The same is true in South Austin. The South River City Citi­zens NA has been split, and should the preliminary map be finally adopted, would not share a district with its 78704 brethren. Though the Oak Hill neighborhoods are clumped together fairly well, the Oak Hill Association of Neighborhoods remains mystified that its proposed district includes Zilker Park and a portion of West Austin.

So far, the most vocal criticism has concerned proposed Districts 7 and 9. Having deferred to those Northeast residents who adamantly demanded that the residents of the Mueller neighborhood be excluded from East Austin districts, the Commission managed instead to link it to Barton Hills, by way of Down­town. Critics point out that the resulting District 9 just doesn't make much sense.

District 9 is also the most populated district, at about 4% above what would be a balanced population distribution – that is, it's about 4% over what the district's population would be if all 10 districts had identical constituencies. With residential construction booming Downtown and along that corridor, others have pointed out that by the time the first single-member election rolls around (November 2014), the population imbalance will be even more skewed, and question whether district parity is already at stake.

Then there's District 7 which, remarkably, stretches from Lady Bird Lake to the outskirts of Pflugerville. It also includes Allan­dale, much to the shock of Allandale resident David Orshalick, who helped fight to get 10-1 on the ballot and into the charter. He spoke at the ICRC's last meeting, and though it was clear that he was unhappy with the map, he remained charitable. "I know you didn't want to do this on purpose, but in essence District 7 is a gerrymander," he said.

The process has even managed to rattle the Austinites for Geographic Repre­sent­a­tion. The group, which was greatly responsible for 10-1's victory, has remained an involved cheerleader during the process, and advocates of very specific draft districts. But the first round of Commission maps caused AGR to sound an alarm that "something weird" was going on, and to express concern that citizen input was not being incorporated. The group subsequently celebrated the revised preliminary map as a giant step in the right direction, though they note there are still "minor, but important, changes" to be made.

There remains time for such changes. The ICRC will hold four more public input hearings this month, one in each of the Travis County precincts, to allow people to propose their own maps and discuss the preliminary map. ICRC legal counsel David Richards has even promised blown-up analog maps "for primitives." Then it's back to the map-drawing board, and into the breach, as Austin moves inexorably toward voting from single-member Council districts for the first time.