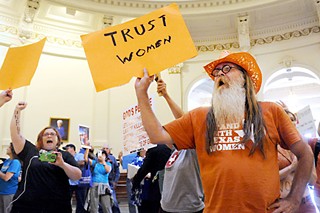 A challenge to two key provisions of Texas' new, controversial, and sweeping abortion regulations law is set for hearing in federal court Oct. 21. Lawyers for a host of women's health providers – including Planned Parent­hood of Greater Texas and Whole Wom­an's Health, both of which have clinics in Austin – as well as individual abortion-providing doctors, have challenged the constitutionality of two provisions of House Bill 2, passed into law during a special legislative session this summer.

At issue in this suit – which will go before federal District Judge Lee Yeakel just a week before the provisions are set to take effect Oct. 29 – are a provision that would require all abortion-performing doctors to have hospital admitting privileges within 30 miles of each clinic where they perform abortions, and one that would allow the state to mandate a protocol for delivery of pharmaceutical abortion, based on Food and Drug Administration-approved labeling from more than a decade ago.

Both provisions place an undue burden on women seeking abortion, violating both equal protection and due process provisions of the Constitution, the lawyers argue in the lawsuit, filed in September (see "Lawsuit Filed Against HB 2," Sept. 27). Hospital admitting privileges are difficult to obtain and unnecessary to ensure the safety of women seeking what is actually a non-surgical procedure, providers argue. According to the lawsuit, if the provision is allowed to take effect by the end of October, there will be no abortion providers left west of I-35, and at least a half-dozen communities along the I-35 corridor – including Waco and Fort Worth – will also be left without access to abortion care, forcing women in need of services to travel long distances at considerable personal expense. Equally troubling to advocates are provisions that would require women seeking very early access to abortion through medication to comply with an onerous protocol for receiving the drug that would require four trips to an abortion clinic in order to complete the process – a situation that could be particularly taxing if clinics do in fact shutter their operations as expected.

Attorney General Greg Abbott's office has not filed a response to the lawsuit and previously declined any comment on the filing. Still, foes of reproductive rights in Texas, including the politically powerful Texas Right to Life, have described the lawsuit as a desperate attempt by the "abortion industry" to cling to a profit-making machine at the expense of women's health and well-being.

Because of the short timeline before the provisions are due to take effect, the parties – the providers, Abbott, and a host of individually named elected prosecutors (who would be tasked with prosecuting doctors who run afoul of the new law) – have agreed to eschew a separate hearing for a preliminary injunction against the law and to instead consolidate all action into a trial based on the merits of the suit. The trial is set to begin Monday, Oct. 21, at 9am.