Then There's This: Dog Days of Parks and Rec 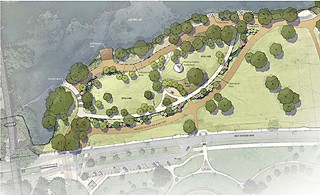 PARD proposes reducing the off-leash dog park at Auditorium Shores to a 3.25-acre site in the western corner of the park, near the train trestle. (Photo courtesy of City of austin parks and rec dept.)

If there's anyone out there who supports shrinking and relocating the off-leash dog park at Auditorium Shores, you wouldn't know it by the overwhelming number of pissed-off dog lovers who packed the house at the Dougherty Arts Center Tuesday night.

The third and final public forum on the proposed park renovations – specifically the changes to the dog park – drew an estimated 200 people and one Great Pyrenees, who sprawled on the floor in the back of the Dougherty Theatre, where an overflow crowd milled about. After listening to Parks and Recre­a­tion Department reps Jesse Vargas and Marty Stump outline the plans with a slide presentation, several dozen people lined up to air their grievances. The meeting started at 6:30pm and was scheduled to last an hour, but at 8:00 there were still people waiting to speak. Some questioned the motive and timing of the plan and a few offered a conspiracy theory or two. (In this instance, a $3.5 million parks donation from concert producers C3 Presents has prompted accusations of a park takeover by a private entity.)

It goes without saying that for every unpop­ular proposal or action that comes out of PARD, there are at least three or four different conspiracy theories to go with it. It also goes without saying that PARD has a history of withdrawing unpopular proposals (privatizing Zilker Botanical Gardens, as one example), so take heart, dog lovers: This proposal still has to go through the Planning Com­mis­sion and City Council. And what with 2014 being an election year and all – well, there's no telling where this plan will end up.

Toward the end of the evening Tuesday, there was already speculation that the city would roll over on this one, either by bringing opponents to the negotiating table or by scrapping the plan altogether.

In the meantime, PARD is hanging tough, despite its reps' hang-dog expressions after getting read out by a bunch of strangers. The proposed changes to the dog park are part of a nearly $6 million makeover slated for Auditorium Shores and its section of the hike-and-bike trail. The first phase of construction is set to begin next month on the trailhead near South First, adding more parking, new restrooms, and water fountains, funded by a state grant and money from a 2006 bond election. Additional work, slated to begin in 2014, calls for installing new sod and irrigation systems, and regrading the main event-space area used for festivals and dog play. That construction would force the closure of the park through 2014. One speaker noted that the closure would not only inconvenience festivalgoers and dog owners, but thousands of people who participate in running and walking events each year.

The most unpopular aspect of the plan would shrink the off-leash area from a good chunk of 18 acres to a 3.25-acre site in the western corner of the park. Because safety concerns have been cited as one of the reasons for downsizing and relocating the off-leash site, a new section of the hike-and-bike trail would be added to redirect runners and cyclists away from dogs and their owners.

The proposed spot – near the Union Pacific train trestle – is particularly offensive to dog owners, who argued that the water there is murky and foul, and the ground is covered with poison ivy. To be sure, that area is currently the least populated area of the park. Plus, the message from opponents was loud and clear Tuesday: We don't give a flying Frisbee about the inclusion of "agility courses" at the new park. Our dogs already have all the agility features they need in the wide open space that allows them to romp around like crazy and take long-jump leaps into Lady Bird Lake.

So far, vocal proponents of the plan include PARD, the Austin Parks Foun­da­tion, the planning consultants, and C3. PARD reps tried to assure audience members Tuesday that C3 "is not driving the ship and not making any mandates," but that just prompted a round of skeptical scoffing sounds from the crowd. This was one tough crowd.

The plan is scheduled to go to the Planning Commission and Council in Decem­ber, with a goal of starting construction in January. Something tells me that dog don't hunt. 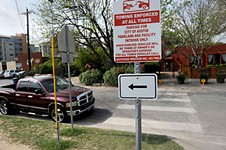 Open City Parks for Business Parking?
A proposal to save one restaurant's parking woes is not drawing many supporters