What's Next for Allan Elementary?

Allan Elementary School is gone, and will not reopen as a neighborhood elementary. That's the sad and seemingly definitive word coming out of Austin ISD about the future of the East Austin campus, after the campus was vacated by the uncontracted IDEA charter school. So now the administration is starting a new round of community outreach, to see what the neighborhood wants in its place.

This would not be the first time Allan has undergone a repurposing. Originally opened in 1957 as Allan Junior High, it became an elementary campus in 1980. In 2011, AISD trustees voted to contract with IDEA Public Schools to run Allan as a public charter school. That decision split the community and the board, and was finally reversed. Now the board has to work out what to do with the old space. As Superin­tendent Meria Carstarphen informed the Sept. 23 board meeting, any plan for the campus will be part of the district's larger facility master plan. However, there will be an additional effort to communicate directly with the neighborhood; Trustee Jayme Mathias called that a response to "the unsettled nature of the community."

Recalling his own comment a few days later, Mathias called it "an understatement." Two years ago, Allan families fought a tearful and exhausting battle. They didn't want AISD to hand over their beloved neighborhood campus to IDEA. Like Rocky, they lost the first fight, but came back swinging, and IDEA was out. Now they want to know what's happening to their campus. Vincent Tovar, spokesman for Pride of the Eastside, said, "Every day the building is empty and shuttered is another day the community feels disenfranchised." 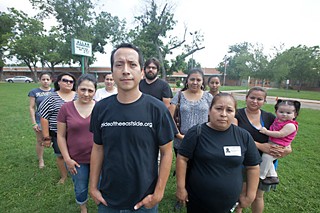 The damage to neighborhood/district relations was nearly crippling, but lessons have undoubtedly been learned. Not least of which is, whatever the board finally decides, there will first be a consultation process, starting with three community meetings. According to AISD Communi­ca­tions and Community Engage­ment Exe­cu­tive Director Alex Sanchez, these meetings have been penciled in for Oct. 15 or 16, Nov. 5 or 6, and Dec. 3 or 4. Rather than the district taking the lead in outreach, Sanchez said that it will be AISD's partners at local education nonprofit Austin Voices for Educ­ation and Youth who will handle that. The district has increasingly used the group to work with communities in East Austin. Most recently, AVEY led the community outreach in finding a new partner at Eastside Memorial (see "Eastside Community Hears National Partner Proposals," April 22). Sanchez said, "They've been very helpful by working with the Govalle, Ortega, and Martin middle school, and the Eastside high school communities, both [campus advisory committees] and the PTAs, so they have strong relationships with those groups already."

Sadly, in some ways the Allan community is already gone. In 2012, when IDEA took over the campus, the idea was that it would serve the neighborhood and the surrounding Eastside Memorial Vertical Team families. Instead, local families voted with their feet, and the overwhelming majority of IDEA Allan students came from not simply outside of the Allan attendance zone, but outside of East Austin. Meanwhile, most of the Allan neighborhood kids were divided between the two other nearest campuses. If it were to reopen as an elementary, Mathias said, Allan would need "the student population which was displaced and has gone to Govalle and Ortega."

There's a certain resigned acceptance that it will be impossible to reopen Allan as an elementary. It's a simple issue: There just are not enough kids of the right age in East Austin. At Allan, the numbers were pretty plain. In the 2012-13 school year, there were 292 neighborhood kids in pre-K through fifth grade, but the building has a permanent capacity of 673. That means that, even if every one of those children chose to attend Allan, it would still only be running at 43% capacity. Its attendance zone population is forecast to increase to 362 kids by 2017, but that's still a long way short of capacity. Tovar said, "In our vertical team, the closer you get to I-35, the more you see schools under-enrolled."

It's an old equation, and it's not restricted to Allan. According to Mathias, there are 3,600 seats for elementary kids in the Eastside Memorial Vertical Team, but only 2,500 are filled. While the district supports neighborhood schools, especially at the elementary level, that costs money. Opening another school in the area would mean new administrators, new catering, and all the additional costs of running an under-capacity campus. Mathias said, "There would be no financial gain for reopening that campus. In fact, there would be financial loss. ... Can we justify that to the taxpayers of Austin?" 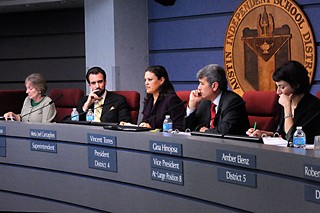 The decline in enrollment reflects a serious district issue. Poor families tend to hop from apartment to apartment, chasing cheap rents and move-in specials. It's always been a problem, as kids migrate from one attendance zone to another, switching schools and, as a result, often suffering in class from the disruption. Recently, the problem has magnified and accelerated, with an additional factor that there are just fewer cheap apartments. This is not simply an issue of condos replacing apartments: As old apartment complexes are remodeled and refurbished, poorer families are being pushed out of their traditional neighborhoods.

For example, several cheap complexes have disappeared from Riverside. End result for AISD: Metz Elementary lost dozens of students. Now the district is busing in large numbers of students to keep some campuses even close to capacity. Mathias said, "Roughly half the student population at Brooke is coming from south of the river, in the Linder elementary attendance zone."

So with the elementary plan seemingly off the table, trustees must find other options. At the Sept. 23 work session, Car­star­phen ran through a list of proposals for the 50,000-square-foot Allan campus. They fall into three broad categories: lease it, use it for administration, or open a new school (see "Options for Allan," p.26). However, as she told the board, not all proposals are created equal. "It's a chicken/egg thing," she told trustees. Depending on the complexity of the final proposal, that could mean major reconstruction – meaning the district would have to issue a request for proposals, go through a bidding process, construction, conversion, and rehabilitation. If they simply lease it out, then they start earning rent as soon as the contract is signed. However, if the district uses the site for its proposed boys' academy, that could take 18 months to two years to complete. "If it's a school, it's unlikely to open for 2014-15," said Carstarphen.

Knowing the time crunch, why didn't the board start these discussions earlier? After all, AISD has known that it would be retaking full ownership of the campus since last December (see "AISD Cancels IDEA Con­tract," Dec. 18, 2012) and IDEA moved out on June 30. However, other than some preliminary talks in April, this was the first time the issue has seen serious discussion. Mathias explained that, until June, the board was focusing the bulk of its energy on keeping Eastside open. Now they can work on other priority issues. Still, he's frustrated that the board did not start earlier and now has a pressing deadline of the start of the 2014-15 school year. "Eleven months is not a lot of time," he said. However, after the public relations debacle of hiring IDEA, "I don't want to see another rushed decision."

Tovar said he was glad to hear that the district was taking public consultation seriously, especially since Austin Voices has built up such credibility in the community. While either the dyslexia school or a real dual language program could fill major gaps in the area's needs, he sees an opportunity for an innovative and collaborative solution to both rising rents and declining enrollments. For example, "We could try to figure out how a school and a housing complex could share that lot. That could stabilize the community by linking public education and affordable housing."