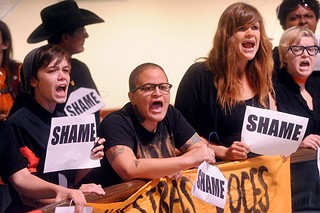 Yatzel Sabat (c) and other protesters outside the HB 2 signing ceremony on July 18, 2013 (Photo by John Anderson)

On Friday, Sept. 27, reproductive rights advocates filed a federal lawsuit against the state of Texas on behalf of abortion providers across the state. The suit challenges two significant provisions of House Bill 2, the omnibus anti-abortion law enacted this summer during the second special legislative session.

The lawsuit was filed against Attorney General Greg Abbott and a host of county criminal district attorneys by the Center for Reproductive Rights, Planned Parenthood Federation of America, the American Civil Liberties Union, the ACLU of Texas, and the Austin firm George Brothers Kincaid & Horton, on behalf of more than a dozen providers of women's health and abortion services – including Amy Hagstrom Miller's Whole Woman's Health and Planned Parenthood of Greater Texas, both of which operate clinics in Austin – and several named physicians. The plaintiffs argue that two of the four provisions in HB 2 place an unconstitutional, undue burden on women seeking access to legally-protected abortion care.

HB 2 contained four provisions that create new and sweeping restrictions to abortion access. The law enacts a ban on all abortion after 20 weeks; a requirement that abortion providers transform their clinics to meet the state's operating requirements for "ambulatory surgical centers" (expensive facilities meant for actual surgeries); a requirement that all abortion-providing doctors obtain hospital admitting privileges within 30 miles of each clinic; and a mandate that any clinics that provide medication (i.e., pharmaceutical) abortion do so in compliance with a more than decade-old, outdated protocol.

The lawsuit (Planned Parenthood, et al. v. Abbott) challenges the latter two restrictions, regarding admitting privileges and medication abortion. A challenge to the 20-week ban will likely come later, as would a challenge to the physical plant requirements – the state has not yet drafted the new facility regulations. Both the admitting privileges and the medication abortion restrictions are set to take effect Oct. 29.

At issue, in part, is that the state has not allowed doctors trying to comply with the admitting privileges portion of the law enough time to do so. "If allowed to take effect on October 29, the admitting privileges requirement will force over one-third of the state's approximately thirty-six licensed facilities where abortions are performed to stop providing those services," reads the lawsuit, "thereby dramatically reducing abortion access throughout the state."

According to the lawsuit, women in at least six metropolitan regions – Fort Worth, Killeen, Waco, McAllen, Harlingen, and Lubbock – would be left without access to abortion care. Fort Worth women would lose access simply because the city is not close enough to Dallas, where one of Planned Parenthood's veteran physicians already has privileges. Notably, hospital admitting-privilege requirements have been enacted, and subsequently blocked by courts, in Mississippi, Alabama, Wisconsin, and North Dakota.

The medication abortion provisions of the law would allow the state, and not doctors, to decide how abortion-inducing medicines should be administered. Under the new law, medication abortions would have to be administered within the first 49 days of pregnancy – when women may not yet know they're pregnant – and women would need to visit a clinic for in-person administration of each of the two rounds of drugs that induce termination. Because Texas already requires a 24-hour waiting period and an extra trip to the abortionist for a mandatory ultrasound procedure, women seeking pharmaceutical abortion would now be required to visit a clinic four times to receive that abortion.

Proponents of the measure say it's simply meant to ensure that pharmaceutical abortions are administered in accordance with federal Food and Drug Admin­istration-approved guidelines, developed more than a decade ago when the drug was first introduced. But that protocol was simply an initial labeling requirement, and not meant to hamstring doctors from administering the drug in a medically and scientifically responsible way, argues the lawsuit. Indeed, the "evidence-based" regimens followed by the plaintiff providers have "been shown to be more effective" than the drug label protocol, reads the lawsuit, "both having a lower rate of ongoing pregnancies and requiring fewer surgical interventions to complete the procedure." To say that all medicines must only be used in accordance with on-label directions would forbid evolved and common uses for many drugs – including aspirin to protect against heart attacks.

In sum, reads the lawsuit, the "challenged provisions of Texas House Bill No. 2 ... violate Plaintiffs' patients' right to liberty and privacy as guaranteed [by the Constitution] standing alone, together, and in conjunction with burdens imposed by existing Texas law, because they are medically unwarranted health regulations and they impose an undue burden on women seeking abortions."

Nancy Northup, president of the Center for Reproductive Rights, notes that the restrictions enacted in Texas, taken together, would be "catastrophic" for women, making access especially impossible for poor and rural Texas women. The lawsuit is meant to "strike back against the hostile politicians who have made clear this willingness to sacrifice the constitutional rights, health, and even lives of ... women" because of political agendas. "We shouldn't have to go to court after every single legislative session," she said during a Friday morning press call.

Neither Attorney General Greg Abbott nor Gov. Rick Perry, both staunch supporters of the measures contained in HB 2, offered any comment on the the lawsuit, though Elizabeth Graham with Texas Right to Life responded with signature vitriol, accusing the advocates of suing only to "attempt to protect their bottom line." Graham said in a press release, "these extremists are desperate to keep playing fast and loose with women's health." That is not true, advocates say, arguing the provisions contained in HB 2 are arbitrary and have nothing at all to do with increasing health and safety protections for women seeking abortion.

"I grew up in Texas and learned early on that women only got what they fought for," said Cecile Richards, president of Planned Parent­hood Federation of America during the press call. This lawsuit is just "the latest chapter in what is going to be a long fight to restore [access to] women's health to women who need it most," she said. "Texas women deserve better."