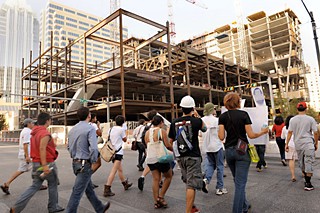 A lawsuit filed last week is the latest twist to a months-long wage wrangle between the city and White Lodging Services Corp. The Indiana-based hotel developer brought suit on Sept. 17 in response to the city revoking its $3.8 million fee waiver agreement and demanding a return of more than $600,000 already awarded to the company, which is building a JW Marriott at Second and Congress. Part of the incentives agreement, brokered from the City Council dais on June 29, 2011, called for White Lodging to pay prevailing wages to construction workers. White Lodging agreed, although the lawsuit now states the wage amendment was added "over Plaintiffs' objection."

According to the petition filed in district court, the Council-approved amendment required that White Lodging comply with a prevailing wage "policy," but the city has no such policy, the developer argues. The petition goes on to state that after the 2011 Council meeting, "Plaintiffs learned both through their communications with [former Assistant City Manager Rudy Garza] and through their own investigation, that the city had no existing 'prevailing wage policy' for privately funded construction projects."

According to city memos, White Lodging ultimately proposed its own set of wage rates for workers and Garza signed off on the plan. Other city officials and Council members were unaware of the wage changes until early this year, when workers, aided by the Workers Defense Project and union reps, began complaining that they were being paid below prevailing wage.

After a series of back-and-forth communications stalled between the city and the developer, the city moved to enforce its fee waiver agreement, meaning that the company would have to pay previously waived fees. White Lodging lodged a protest with City Manager Marc Ott, who tossed the ball to City Council, which took no action on the matter and thus placed the ball back in the developer's lap. White Lodging answered with a lawsuit filed by Armbrust & Brown attorney J. Bruce Scrafford.

The city has not yet responded to the suit and, as of press time, no hearing date had been set. In addition to the injunction, White Lodging is also asking the court to make a constitutional ruling on the right-of-way fees the city charges developers for construction projects. The filing calls the fees "excessive, unreasonable, arbitrary and not justified by any legitimate exercise of police power." 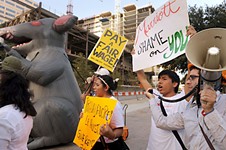