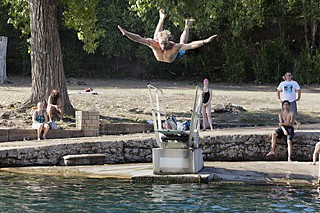 Following the summer-long budget marathon, there's no regular City Council meeting this week – those resume Sept. 26 – although all Council members are expected to be on hand at 9am Thursday morning, Sept. 19, at Barton Springs Pool for what is billed as a "Council Fixes the Pool Day" to discuss the city's efforts to improve the pool and grounds. Monthly cleanups (partly volunteer, and sponsored by Friends of Barton Springs Pool) are a regular feature of the pool schedule, and a few times a year you can expect to run into a Council member or two working the algae detail.

This week's subject is the Barton Springs Pool Master Plan for which "[c]onstruction is scheduled to start immediately after the Austin City Limits Music Festival, and is expected to be completed in April 2014. No pool closures are anticipated for the project; however, areas of the pool grounds will be inaccessible as work progresses." Wear your Speedo: Thursday's your chance to help the pool and simultaneously buttonhole (dunk?) Council members.

Looking forward, the draft Sept. 26 agenda, at 143 Items, is no slouch, although half of those are consent items unlikely to raise much controversy, and more than 30 others are zoning issues of fairly restricted interest. Council is set to approve the recently negotiated Emergency Medical Services union contract, with no word yet of any progress on the firefighters contract. Thus far the member-sponsored items are directive resolutions to staff; generally a few action items crop up on the final agenda (due Friday).

A few of the higher-profile zoning proposals may generate opposition: On closed hearings with previous votes, Council was split on the Clawson Road upzoning from single-family to "patio homes," and also on the Huber Family Tract (River Crest Drive). The Lantana Tract (6401 Rialto Blvd. in the Barton Springs Watershed) is scheduled for public hearing considering a change from office to multi-family zoning, with restricted covenants. And Franklin Barbecue, at 900 E. 11th St., is asking for a rezoning from multi-family to "community commercial," with a string of associated planning acronyms and (we hope) at least as much real sausage.

Amidst a brace of annexation hearings (4pm or later) is a return of short-term rental regs – don't be surprised if that gets punted downstream once again. If you survive all that, you will have earned the honorary 5:30pm appearance of the Hot Texas Swing Band.