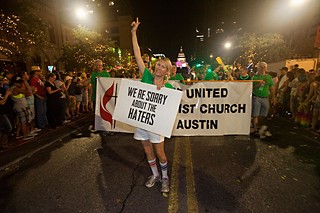 › On Tuesday, after spending much sweat equity, City Council adopted the city's FY 2013-14 budget, with no increase in the property tax rate but additional funding for police, parks, and development review. See "City Council."

› Looks like Austin-Bergstrom International Airport is adding seven gates at just the right time. July saw 922,615 passengers pass through, up 6.5% from July 2012 and breaking the airport's record of 911,675 set in June.

› Which browser are they using? Government Technology magazine just named www.austintexas.gov as the nation's best city government website, even though search engines still reliably turn up dead links on the site, and its brown-on-brown color scheme is not friendly to people with visual impairments.

› Travis County prosecutors will not seek the death penalty for Cathy Lynn Henderson when she is finally retried for the 1994 death of baby Brandon Baugh, who was left in her care. Henderson was previously sent to death row, but her conviction was overturned after new scientific evidence showed that Baugh's injuries could have been accidental as Henderson had claimed.

› Here's a tip: Probably not a good idea to try to bribe a federal judge in order to secure a lighter sentence for a friend – just ask cronies of the Zetas drug cartel who have been convicted of conspiracy to commit money laundering in federal court in Austin. Two associates are now facing time in the slammer too, thanks to an ill-conceived plan to try to bribe Judge Sam Sparks.

› Are you a teenager in need of work or maybe just quick cash? If so, Reena Patel is looking for you – or she was, last week, before she was arrested for solicitation of capital murder. Witnesses say Patel drove to a North Austin apartment complex where she asked random teenagers if they would "permanently take care" of her husband. A witness called 911 and Patel was taken into custody with a $1 million bond.

› Opposition is mounting against the Lower Colorado River Authority's latest drought fix – a proposal to lower Lake Austin by two to four feet. Lakeside residents have attracted the attention of Sen. Kirk Watson and are petitioning Mayor Lee Leffingwell and City Council. In a Sept. 3 Statesman editorial, LCRA general manager Becky Motal characterized the reaction as "near hysteria."

› The LCRA Board also voted to honor its commitment to provide water to maintain the health of Matagorda Bay during September, but will also seek emergency relief from the Texas Commis­sion on Environmental Quality to reduce or suspend those obligations for the rest of the year.

› Disaster is in the air at the 40 Acres, where the Longhorns' embarrassing 40-21 Saturday night loss to the Brigham Young University Cougars has led to fan outrage, team soul-searching, demotion of defensive coach Manny Diaz, and widespread gnashing of teeth. UT faces Ole Miss Saturday night at Memorial Stadium, where another loss would mean 100,000 boo-birds and generalized panic.